Scientists believe climate change is one of the Earth’s biggest threats, with consequences such as loss of sea ice, accelerated sea level rise, hurricanes and longer, more intense heat waves. As the Earth keeps getting warmer, the negative effects are expected to continue.

The more that is learned about the effects of climate change on environments around the globe, the more one can see why action needs to be taken to reduce energy waste causing climate change. This is why some countries are taking major steps to boost renewable energy production. In 2015, renewable energy investments reached nearly $286 billion worldwide, six times more than in 2004, according to a report published by the Frankfurt School of Finance & Management. Sustainable, renewable energy is growing in many areas, but not quickly enough to meet expected energy demand.

Here in the U.S., the Obama Administration’s strategy to make the country more energy independent included the largest clean energy investment in the country’s history. Since 2008, the country has doubled its renewable energy generation from wind, solar and geothermal sources. Several initiatives have been launched to advance clean energy deployment—increasing solar electricity generation by more than twenty-fold and tripling electricity production from wind power.

In addition to government-led investments, some industry giants are addressing climate change as well. General Motors announced a plan in 2016 to power all of its global operations with 100 percent renewable energy—such as landfill gas, wind and sun—by the year 2050. The automaker has pledged to generate or source electrical power for its 350 operations in 59 countries with energy generated from wind, sun and landfill gas. This builds on GM’s previous goal to develop 125 megawatts of renewable energy by 2020. GM has already saved millions of dollars by using renewable energy.

The rise of renewables in the Lone Star State has gone virtually unnoticed, yet it has been quite impressive. Texas has added more wind-based capacity than any other state, with wind turbines accounting for 16 percent of electrical generating capacity as of April 2016. That number sat at two percent in 2001. Now, Texas is anticipating a large surge in solar power. State officials believe wind and solar power will play a significant and growing role in the state’s energy future even when federal subsidies decline in the future.

David Hoelke, director of System, Infrastructure, Utilities and Energy Management, said that in 2015-2016, TCC consumed about 65,303,958 kilowatt hours of renewable energy to power its facilities.

TCC South Campus has a slightly higher percentage of renewable energy, about 84 percent because of solar photovoltaic panels and a 10.0 kW wind turbine (pictured left) at the campus’ 87,000-square-foot, $42 million Center of Excellence for Energy Technology (CEET). Hoelke expects TCC to connect the wind turbine to the local grid, with the facilities department tracking the amount of energy used from these two. Overall, the campus consumed about 7,003,000 kilowatt hours of renewable energy for the 2015-2016 academic year.

Thomas Hart, department chair and assistant professor of electronics at TCC South, believes the proliferation of wind turbines being installed nationwide provides an opportunity for more businesses and communities to have the opportunity to benefit from renewable energy. “There are already businesses around the DFW area that use solar photovoltaic panels to power their entire facility. Trinity River Authority on Northside Drive is one example,” he explained.

Industry experts believe Texas wants to have a diversity of resources because no one knows what gas prices will be in the future. ERCOT, the state’s electric grid operator, expects explosive growth in solar power, with Texas poised to vault from tenth place among states in solar capacity to second in the next five years, trailing only California.

“NRG Energy management is encouraging its customers to use solar photovoltaic in addition to the electricity drawn from the local grid,” said Hart. “This would provide electricity in times of emergencies when power lines are downed due to natural disasters.” 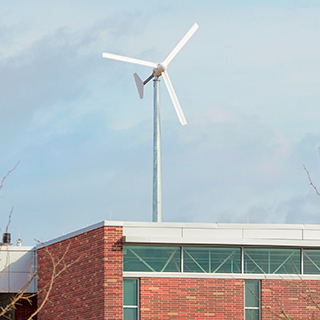 “Here at TCC, students can pursue an AAS degree in Renewable Energy under the Electronics Technology heading,” Hart said. “We also offer a certificate of completion -- Renewable Energy Technician -- to help students prepare to enter that career field. These are not new technologies, but with the newer engineered materials, more energy can be generated and utilized than before.”

Filled with natural light and the latest technology, the multimillion CEET provides a learning lab for students. Exposed ductwork and piping shows where the hot and cold water flows, where climate-control infrastructure is located, while three large touch-screen monitors provide real-time data on the building’s energy consumption. The wind turbine a visual learning tool that will provide hands-on experience for technical students. Students will be able to monitor the output wattage from both solar and wind to determine the effectiveness of using these power sources.

“The Center of Excellence for Energy Technology facility is a teaching tool itself, showing students and others how a large complex can be completely powered by solar photovoltaic panels,” Hart said. “Additional energy will be available soon from our new wind turbine.” Students will be able to monitor the output wattage from both solar and wind to determine the effectiveness of using these power sources.

The building’s Oil and Gas laboratory and Industrial Maintenance laboratory both contain training equipment that allow students to have hands-on experience with these energy sources. Students also will have access to the wind turbine to learn how to service a unit when it begins to fail in producing the desired energy.

Overall, Texas ranks second nationally for employment in the renewable energy industry. For individuals interested in finding out about conserving energy, reducing waste and being more environmentally responsible in the building and remodeling industry, TCC represents a convenient and affordable starting point.

“It gives me a sense of pride that Tarrant County College is taking such a significant role in the advancement of renewable energy,” said Fort Worth City Councilwoman Gina Bivens. “I remember decades ago, when I was a corporate spokesperson for TXU, there were two voices heard on this topic: pro coal or pro solar and wind. Now things are different. I see individuals and the business community joining in the quest for renewable energy. The extra gem on this topic is the fact that we are seeing jobs created, which automatically fosters a job training component as well.”