With the tenets of diversity, equity and inclusion woven into its cultural DNA, Tarrant County College welcomes students from around the globe. In the 2018 spring semester alone, students from 71 different countries were registered here.

According to Rebecca Griffith, district director of Admissions and Records, there are many types of international students at TCC. “Some are seeking or have a student visa; others are living here under other visa programs and some have immigrated to the United States International Admissions serves students seeking or holding visas that permit them to study in the U.S.”

International students often face significant challenges. For many of them, however, getting here was no easy feat. Vivian Lu, enrollment associate in International Admissions, can relate. Lu immigrated to the U.S. in 1994 to pursue her Master of Education degree with an English as a Second Language (ESL) concentration.

According to Lu, challenges international students face in coming to school in the U.S. include language barriers; navigating federally mandated admission and registration requirements; deciding which major to pursue; how to start classes and, once classes begin, understanding assignments and how to perform research.

Mary Cinatl, coordinator of the English for Speakers of Other Languages (ESOL) program at TCC Southeast, considers admission, testing, registration and financial need to be the greatest challenges. “There are myriad documents some students need to have in order to proceed and language is a consistent thread running through these processes that make them even more challenging,” she said.

“Every international student has a story; some of our students had to go through a lot of obstacles to make it into the United States to pursue their education,” said Sheila Addo, an academic advisor at TCC Southeast, who specializes in advising international and English for Speakers of Other Languages (ESOL) students.

“It was a risk to come to the U.S.,” said Junjie Hao, a Computer Science major from China. Hao said it was scary for a young man who just graduated high school to start a new journey alone in a foreign country. His father encouraged him to come to America “because the U.S. has the best college-level education in the world.”

In addition to facing the normal challenges of moving to a new school in a new country, Hao also struggled with stress and depression related to the language barrier and homesickness. “I could not handle the stresses of taking classes and doing homework in English,” he said. “Suddenly living without my parents’ control gave me a chance to lose myself.”

To handle his stress, Hao immersed himself in video games, which he said became like drugs to him and cost a lot of time. He was attending a four-year university then. “Because of language obstacles and poor self-management, I got some ugly grades.”

When he decided to get his life back on track, he applied to TCC. During his application process, he said Vivian Lu encouraged him most. “She knows what I have been through, and she understood,” he said. According to Hao, Lu built his confidence to take the Texas Success Initiative (TSI) Assessment test and offered “tons of helpful suggestions on choices of courses and managing relationships around me.”

Since coming to TCC, Hao’s grades have improved significantly. In fact, at TCC, he has a 4.0 GPA.

Hao plans to transfer to The University of Texas at Arlington in 2019 and work as a computer programmer in the United States after graduation.

I left the comfort of where I grew up and came to a foreign land not knowing how I would make it and what would happen.

“It was risky and full of uncertainties,” said Mawunyo Makebi, who attends TCC Trinity River. At the time, Makebi was pregnant and also had twins. She fled her home country of Ghana due to an abusive relationship. “I lost a pregnancy at 32 weeks because of the abuse and stress. From the way things were going, I knew if I did not escape, I would lose the baby and likely my life as well.”

After she came to the U.S., Makebi worked for about a year. She believed she had the capacity to do more if she went to college. She wanted to pursue a medical career “to help families, especially single moms, who were going through difficult situations and needed care and encouragement.”

Makebi learned about TCC from a co-worker and applied. She appreciates the cost savings and said TCC encourages success, which she seems to be finding at TCC.

“Coming from a different continent, a different culture and a totally different world, I could not have asked for more than TCC,” she said. Makebi worried about keeping pace with her studies, but found help where it was needed. Now, she is more confident and helping other international students. She plans to study Nursing at TCC and then work on her bachelor’s degree, after which she will stay in Fort Worth and “work to serve others.” 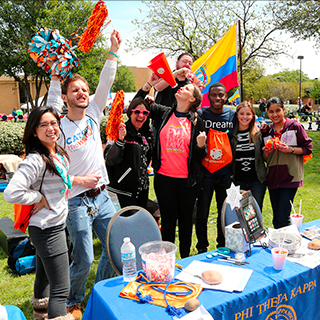 Just as every international student has a story, each one has value, not only to TCC but also to the community as a whole. “The wealth of experiences and unique perspectives each student brings can enhance global education, intercultural awareness and competency for employees and students at TCC,” said Andrew Duffield, TCC’s chief diversity officer. “Accepting international students at our colleges and universities has traditionally been one of the most important ways America continues to emphasize its values to be globally engaged,” he said. “Also, international students who have spent some time in the U.S. become ambassadors for change upon returning home, sharing an appreciation for common values, offsetting stereotypes about the U.S. and enhancing respect and dignity for all cultural differences,” Duffield added.

TCC recognizes international students during commencement ceremonies with flags representing the students’ countries of origin draped around the arena. “It is touching to see them posing near their flag just after completing their goal at TCC,” said Griffith.

International Students interested in TCC can get more information at tccd.edu/students/international