The average reported age at which retired Americans ended their careers is 61, according to a recent Gallup report. Ebbie Smith passed that by more than a quarter-century ago, and he is still going strong in his role as adjunct professor at Tarrant County College Northwest. For Smith, who turned 87 in 2019, continuing his work is a natural choice. 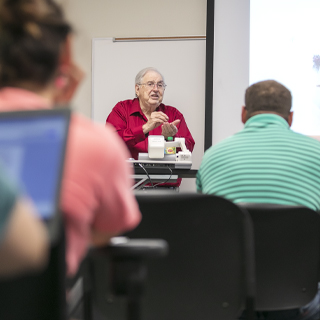 “I am committed to teaching and my students,” explained Smith. “Also, I’d rather be busy than bored.”

By all accounts, he has stayed busy throughout his life, which began in Houston in 1932. While a student at Conroe High School, Smith selected his career path: he would teach. That suddenly changed, however, when Smith felt called to enter the ministry. During his senior year, he became a Baptist minister.

After graduating from high school, Smith enrolled at Hardin-Simmons University in Abilene to study theology. To pay for his education, he worked two jobs in the campus dining hall and as a janitor.

“Those jobs helped tremendously,” Smith noted. “The experience of working and attending college led to developing the habit of carefully using time and keeping up with differing responsibilities.”

He managed those responsibilities well. During his junior year of college, Smith accepted the position of pastor for a church in Millersview, about 100 miles south of Abilene. He also married his high school and college sweetheart, Donna Rodman. Despite the changes—and a long commute—the Smiths persisted in their education and graduated from Hardin-Simmons in 1954.

Life then brought the couple to Fort Worth, where Smith enrolled at Southwestern Baptist Theological Seminary. While earning his Master of Theology and Doctor of Philosophy, he served as pastor or interim pastor for multiple congregations—and started a family. He and Donna would ultimately have three sons and a daughter.

A few months following Smith’s graduation from Southwestern Baptist, the family set sail for Indonesia to serve as missionaries. During the time abroad, which began in 1961 and spanned 15 years, Smith began combining his Christian service with his original career goal. He taught at the Indonesian pastor training school using the native language. He also earned another master’s degree, this one in the field of missions.

While the family’s missionary experiences were gratifying, Indonesia was a place of great tragedy. In 1973, son Roger passed away after a motorcycle accident. The family buried Roger in the island nation. Faith kept the Smiths going.

The family returned for a furlough in the United States about a year following Roger’s death, living in Houston but planning to return to Indonesia. After a few months, however, Smith began to sense that something else was in his future.

“One day I came in and my wife said, ‘I don’t know how to say this and have been dreading bringing it up, but I have a growing feeling that God does not intend for us to go back to Indonesia at this time.’ I told her that I had been feeling that as well,” remembered Smith. “The next day, Southwestern Baptist Theological Seminary called and asked me to teach in Fort Worth.”

The family moved north, and Smith started his career as a full-time professor. He taught in the fields of missions and Christian ethics.

“Dr. Smith is brilliant yet as humble as any man I’ve met,” said Jim Burgin, who studied under Smith in the 1980s. “His door was always open, and you would often find him in a group of students talking about ethics—as if he were just another student in the mix but subtly guiding the conversation to a positive conclusion.”

Smith’s instruction had a lifelong impact on Burgin, a pastor for Mission Arlington/Mission Metroplex and the leader of Grace Street Fellowship.

As Smith shaped the lives of students at Southwestern Baptist, he also became a student again—earning a master’s degree in sociology from the University of Texas at Arlington. Then, after more than two decades as a Southwestern Baptist faculty member, Smith decided to retire from the classroom. He worked at a funeral home and later as a hospice chaplain. Yet, Smith felt compelled to return to teaching. About 10 years ago, he joined TCC.

He began teaching in the departments of sociology and philosophy at TCC Northwest. Smith quickly became a student favorite, known for insightful, engaging instruction as well as his compassion.

“Without actually bringing my pastoral function into the classroom, I find that my experience in that area enables me often to realize when students are going through personal crisis situations. It is my hope that I am able to be of some small help to them,” said Smith.

In addition to teaching, Smith writes and publishes books through a ministry he cofounded called Church Starting Network. He also has written for other publishers. In all, Smith has authored a dozen books (including two novels), coauthored four books and coedited as well as contributed to an authoritative textbook on missiology.

Smith has continued all this work even when others might have chosen to stop. Around the time he was hired at TCC, Smith and his wife lost their eldest child Randy due to health issues. And a year or so ago, the couple moved into assisted living. Smith also realized he was no longer a safe driver.

“My eyesight at night played a part, and after falling and breaking my leg, the issue increased,” said Smith. “I decided something was amiss with knowing you were a less safe driver but still driving to school to teach ethics.”

So he turned to ridesharing. One day the Lyft app happened to connect him with driver William Pierce—a former student at Southwestern Baptist.

“I was really happy to get back in touch,” said Pierce, who ended up transporting Smith to TCC more than once. “We were able to have great discussions, and I enjoyed getting to know him outside the classroom. I hold him in very high esteem.”

So do his current students, such as Jannat Alsammarraie.

“His class is very joyful and interesting. Professor Smith throws jokes in the middle of class and makes everyone laugh,” said Alsammarraie, who studied world religions under Smith in summer 2019. “He teaches like he is telling a story.”

Alsammarraie—who has recommended Smith’s classes to friends—notes that he has a special way of connecting with students.

“He treats people the way they like to be treated. For example, since I am wearing a hijab, he said, ‘Alsalam Alaykum’ to me the first day I entered class,” she recounted. “I appreciated that.”

For Smith, those he teaches are his motivation.

Smith does look ahead to the future; he has indicated an intention to retire from teaching at 90, but “who knows,” he added.

In the meantime, busy he will stay.