According to a Department of Justice special report published in 2015, the percentage of public higher education institutions using sworn officers was 92 percent, compared to 38 percent for private institutions. Tarrant County College is no exception with an elite, highly trained police force committed to keeping the College safe for faculty, staff, students and the community. However, it hasn’t always been that way.

In an article in The Atlantic, Bill Taylor, former police chief of San Jacinto College in Texas, said law enforcement in higher education started in the 1960s and ‘70s—an era characterized by widespread student unrest amidst the Vietnam War and racial segregation.

That was true at (then) Tarrant County Junior College’s (TCJC) South Campus as well. According to Mitchell McEwing, former dean of students, “A lot of unrest came from the community onto the campus.” McEwing addressed it through listening to student concerns and stressing classroom rules to keep everyone on the same page.

“Race relations were sometimes a little tense, but not nearly as much as conflict over the Vietnam War,” said Larry Story, assistant history professor. “I had veterans of that war, and other wars, in my classes as well as war protestors, so it got pretty tense sometimes.”

When Jerry MacLachlan became director of public safety for TCJC in 1970, the College had only a security force primarily responsible for locking buildings and writing parking citations. Under his leadership, that changed.

MacLachlan revamped the department into a police force over which he became chief. He implemented several changes including extensive background checks, pre-screening psychiatric exams for applicants and 10 weeks’ time with a field training officer for new graduates from the Police Academy. Additionally, MacLachlan provided officers with state-of-the-art equipment and weapon specialists responsible for training.

The requirements to join the force are still high, including a preliminary test, a panel board interview, medical and psychological tests and finally, an interview with the chief. “It’s most important to be respectful,” said Assistant Police Chief Leigh Dietrich. “If you’re not respectful of the people you serve or the people with whom you serve, that’s not something I can train into your being.” 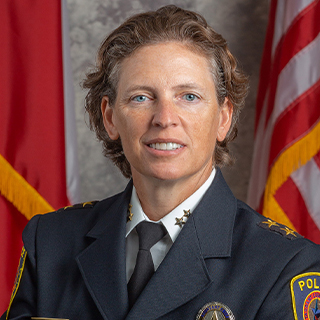 Respect plays into the Community Policing Model, which TCC has used since the inception of its force. Community policing involves police partnering with citizens and local agencies to reduce crime and disorder. “That policing model has really taken off. We have a dual purpose, not just arresting people,” said Dietrich. “We can do that, but we focus more on keeping the environment safe and secure while also educating people. It works very well for us,” she said.

Several TCC police officers have come from a municipal background, working for a city or county. Dietrich says municipal work can be fun and exciting with the ability to gain experience quickly, but the disadvantages include high call volume and pressure on officers. “You’re just run ragged,” she said. “That’s just not us. Our officers are not so overloaded that they cannot do the community policing we want.”

TCC South Police Captain Darren Clark joined TCC after serving on police forces for the cities of Azle, Weatherford and Westworth Village, as well as the Weatherford College Police Department. “While municipal police departments use law enforcement to reduce crime, TCC Police use engagement with the campus community to build trust and respect. This trust and respect helps create a safer environment where meaningful learning can take place,” said Clark.

Sometimes, officers have to educate individuals about the meaning of their badges. Patrol Officer Johnny Holland pulled over a woman at TCC Northwest. She said, “Why are you pulling me over? You’re not a real cop,” treating him as if he were a security guard. “Once I explained the difference between the police and security, she apologized,” said Holland.

Building relationships takes time. According to Dietrich, officers are committed to building a bridge to students “just by being there.” She smiled when she mentioned Captain Jerome Albritton, police commander at TCC Trinity River. “We call him ‘The Mayor,’” she said. “He’s always out of his office, meeting the students and answering questions.” 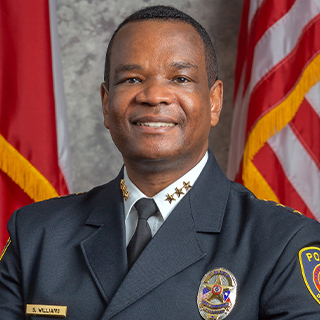 Service is one of the five qualities displayed on challenge coins given by TCC Chief of Police Shaun Williams. “Everything is our job,” said Dietrich. “Ask us. If we can’t handle it, we can find out who can. Reach out to us for help.”

Captain Terry Moak, campus commander for TCC Northeast, says the police do their job with a service heart in mind. “Always trust the officers to have empathy,” he said.

That service can take various forms. George Rangel, patrol officer at TCC Southeast, says some days are busier than others. Calls for service can range from criminal offenses, student conduct, lost/stolen items, vehicles that are damaged or impaired—locked with the keys inside or in need of a jump start—locked rooms and people who are ill or injured. And then, there are snakes. “Three in the last few weeks,” said Rangel. 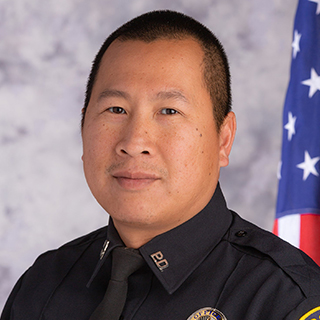 TCC also offers an eight-member honor guard that serves at funerals and special events. As a member of the honor guard, Patrol Officer Tien Tran served at four of the five services for the Dallas Police Department officers who were killed in the line of duty during a protest in Dallas in July 2016. Tran was amazed at how much support officers received from those they served in the community. “We had overwhelming support from the public during those days,” he said. “People were lining up for miles along the highway and city streets to pay respect during the funeral processions, not only for the officers killed in action, but for the entire law enforcement profession as a whole.” Tran said it was a valuable reminder of how important the job of the police is, protecting and serving the people in the community, regardless of the narratives painted by those who oppose law enforcement.

Acts of service by the TCC Police rarely receive that same level of recognition, but they continue to serve faithfully, along with their leaders. Dietrich shared an experience at TCC’s May Owen Center, where her office is located. One Friday, she was walking to her car close to 6 p.m., when most of the offices within the College were closed. A car pulled into the restricted lot at the back of the building. The driver was looking for help and seemed exasperated.

Even though it had been a long week for Dietrich, and she was more than ready to go home, she stopped to help him. He was a student who needed his financial aid paperwork so he could get his tax refund and drove to TCC for help after a long day on the phone with no resolution. Dietrich listened as the student poured out his frustration, then ran inside to see if anyone could help him. There happened to be one person available that evening who provided the contact information he needed, which Dietrich gave to him, along with her card, telling him to call her the following Monday if he didn’t get the help he needed.

Sometimes it’s just that little thing, listening to someone so they can be heard. Is that the police officer’s job? Probably not, but I have no doubt that anyone who works for me would do the same thing, and probably more so. 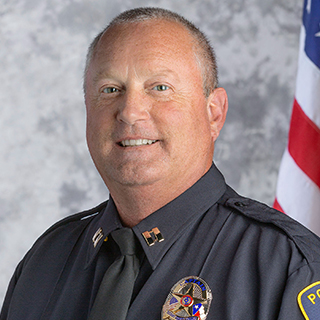 Protecting TCC and the community is a priority for the police. “I do not ever want a student, faculty member or community member to say, ‘I came up last night and I didn’t feel safe here,’” said Dietrich.

Administrative Captain David Herndon considers the police to be ambassadors for the College – to help, not give a hard time. “We want (faculty, students and staff ) to feel safe here on campus. We want them to feel comfortable enough to let us know when crimes happen to them.” Herndon oversees the compilation of area crime statistics for the Clery Report, a federally mandated report made available to employees and students every October. 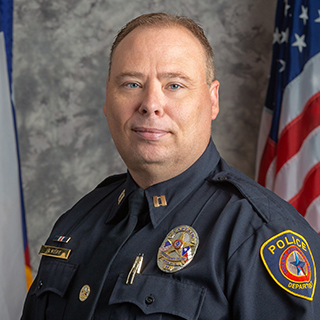 Terry Moak agrees. “We’re here to serve by providing a safe environment,” he said. The longest-tenured member of the TCC Police with 27 years of service at the College, Moak says law enforcement changed with Columbine, referring to the shooting massacre that left one teacher and 12 students dead at a Colorado high school in 1999. “When I got into law enforcement that was unheard of. It just didn’t happen very often,” he said. “Now, it’s increased ten-fold. Any given week or month, you hear about an active shooter at a school or a college.”

Patrol Officer Gwen Parker, who is responsible for the TCC Opportunity Center, says officers go through hours and hours of annual training to prepare. “The emphasis is always on awareness,” she said. “You never know what is going to come around the corner. With TCC being high density, we want to be aware of what is doing on in the world. There have been high school and college shootings, so we’re always on watch. I would say hyper-aware.”

Holland says TCC police really care and go all out for those they serve. “When you see me, know I am looking out for you. I see what you don’t see,” he said. “I’m a sheepdog. So, I want you to go be a sheep. Do what sheep do and know that the sheepdog has your back.”

There are times that problems lead to solutions. That happened to Albritton, who found himself at a loss to assist a Deaf student in distress in 2016. He reached out to Sammie Sheppard, coordinator of the Sign Language Interpreting Program. The request for assistance came at a perfect time, because Texas had passed a law (SB 1987) earlier that year requiring all peace officers to receive training in interacting with drivers who are Deaf or Hard of Hearing. “If we’re going to protect and serve someone, we need to be able to communicate,” said Albritton in an interview with Channel 11 News.

In response to that need, the TCC Sign Language Interpreting Program and the TCC Trinity River Police created “Hands in the Air! Let’s Communicate!” a class to empower officers to understand and better communicate with Deaf and Hard of Hearing persons. Albritton invited other police agencies to participate, and, according to Sheppard, the room was packed.

A month before the class, a North Carolina man who was Deaf, was shot to death by a state trooper during a traffic stop, which led to heightened awareness among law enforcement. His family members believe that if the officer knew the man was Deaf, the outcome might have been different.

During the class, officers learned how to identify a Deaf driver on a traffic stop and important Dos and Don’ts in interacting with someone who is Deaf.

Responses to the class were positive. Sheppard has already received more requests for classes, and says her team is ready to help.

“Through our conversations, participants realized that many of the views espoused in the media were based on less than factual information or (viewed) through certain lenses that did not paint the entire picture,” said Clark. “Ultimately members of the group grew to respect each other for their similarities rather than the differences.”

The Community Policing at TCC works and garners praise. “TCC’s Police Force amazes me,” said Tahita Fulkerson, who most recently served as interim president for TCC Northeast. “I’ve worked on every campus and have never seen anything less than an authentic commitment to protecting us—obviously—and also a commitment to service.”

Officers feel respected, which Patrol Officer Juan Rosales said is the “result of the way students are treated by law enforcement. The students and teachers know that the police are watching out for them.”

Dietrich tells those considering becoming an officer and working at TCC, “Don’t do it for the money. Do it for the people. To do it here is 10 times better, because we are so appreciated here!” 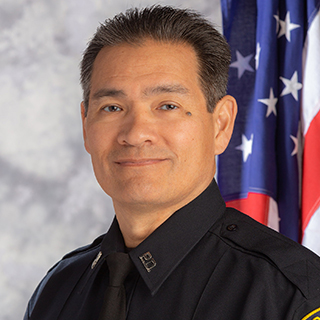 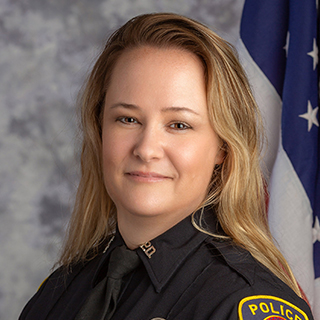 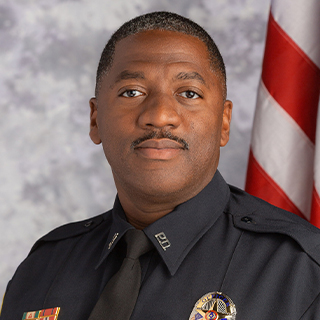 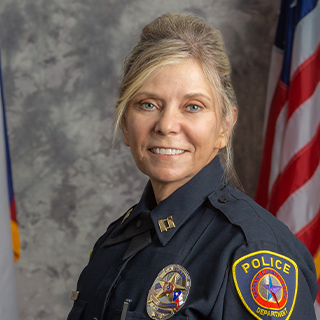 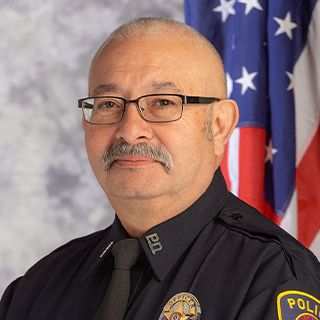