Lillie Harrison sits in microbiology, a course with a fearsome reputation among Tarrant County College health sciences majors, for whom it’s a must-take, must-pass proposition. Only one of every four students makes it. She listens attentively, taking notes and asking questions—just like any other student. Except she’s not a student. At least, not in this class. 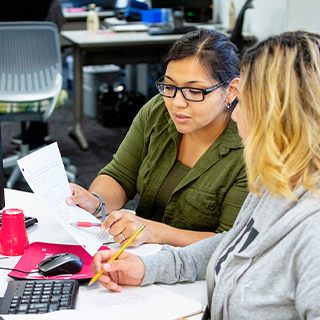 Oh, she took the course all right, but it was during the previous semester—made an A, too—but she’s in this class as part of TCC’s Supplemental Instruction (SI) program through which a student who’s done well in the course sits in a second time around and holds separate sessions to explain concepts or clarify sticky parts of the faculty member’s lecture.

Hung Vu of the TCC Southeast biology faculty was unsure when approached about participating. “I was hesitant,” he said. “I asked, ‘What is this—tutoring?’”

“Look at it this way,” he was told. “A student in your class seeks help from someone who’s already been successful in that course. They’re then joined by another student and another and still more.”

“But how,” Vu asked, “will the student helping them know what material’s being covered?” “They’ll know,” was the answer, “because they’ve been sitting in that class all along.”

Kaheh Azimi at TCC South, on the other hand, was on board the second the gangplank was lowered. “Chemistry is a difficult subject,” he said. “A lot of students struggle in there, so I thought this would be a good idea. I didn’t need convincing. I just went for it.”

SI was developed in the early 1970s at the University of Missouri-Kansas City, which had changed from a private to a public institution several years before, thus reducing admissions selectivity. Some programs, primarily in the graduate health sciences, experienced high dropout rates. Doctoral student Deanna Martin was hired to develop a program to combat the problem. The solution had to be cost-effective, verifiably successful and could not include “remedial” courses because of the negative connotations attached and the attendant tuition cost to the student.

Martin knew that tutoring could be effective, especially if done by the students’ peers, but was expensive if done one-to-one and difficult to evaluate. Her solution was to target the course instead of the student. The “tutor” would be a student who had done well in that course, was less expensive to hire and, by sitting through the lectures, would be better able to address specific topics covered by the instructor.

The program was successfully piloted in 1973, expanded to the undergraduate curriculum in 1981 and that same year was named an Exemplary Educational Program by the U.S. Department of Education. It has since expanded to more than 1,500 colleges and universities in 30 countries.

TCC was relatively late to the party. It wasn’t until 2013 that Chris Darville, formerly with TCC South’s Counseling Office, was tasked by TCC South President Peter Jordan and then Vice President Larry Rideaux to develop an SI program. Darville started small with a few courses, mostly related to technology and math programs.

The results were very good, but the really impressive thing that happened was when we had a summer school course with mandatory SI sessions built in right after class. One hundred percent of those students were successful. 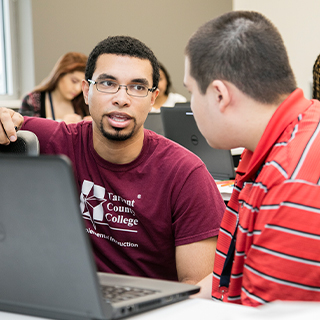 Shortly afterward, the Board of Trustees approved $1.4 million for expansion of the program to all campuses. Darville was called on to direct it as director of learning success.

Darville moved on to become senior director for YES Pres Public Schools Inc. in Houston, but his program continues to flourish. Those few sections have expanded to 179 in Fall 2018, the last semester for which statistics are available, and their SI sessions targeted more than 4,000 students in 42 courses.

These courses are selected by a combination of enrollment, difficulty and their SI history. The criterion first examined is a course’s DFW rate—that is to say, the percentage of grades of D or F and the number of withdrawals – any of which, based on TCC’s criteria, mean a student has not been successful. The DFW rate is then aligned with enrollment as the College tries to get the greatest impact from the program. Given comparable DFW rates, a course with a larger enrollment is more cost efficient.

Just because a course has a high enrollment doesn’t mean it’s necessarily the best candidate for SI. “Composition I should reach a lot more students,” said Colleen Fitzpatrick, SI coordinator at TCC Trinity River, “but that’s a course where, at least for my campus, we don’t have the best attendance at SI sessions.” 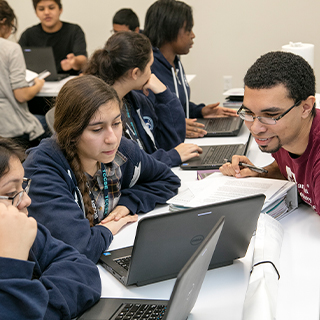 Participation in SI is not mandatory for faculty members, so not every class section of an SI course is included. Thus, faculty enthusiasm for the program plays a significant role in both how many SI leaders—the experienced students who lead the SI sessions—are hired and who those students are. District Director of Academic Operations Rosalyn Walker said that, in addition to seeking qualified students, “we take recommendations from faculty. They may have outstanding students whom they would like to see hired.”

It makes sense, Azimi said, to have an SI leader whose experience has been with a faculty member in whose class they serve. “It will give that student a familiarity with the concepts of the course and details and things that I emphasize in my classes because different people obviously have different points of emphasis,” he said.

Faculty recommendations and a good grade in the course aren’t enough, however, to assure employment. “I’m personally OK with the student having earned a B in the course,” Fitzpatrick said, “because sometimes it means they had to struggle.” Someone who breezed through the course, she said, might come across as abrasive and condescending, and students in the class “won’t come back to SI sessions because they won’t feel comfortable.” 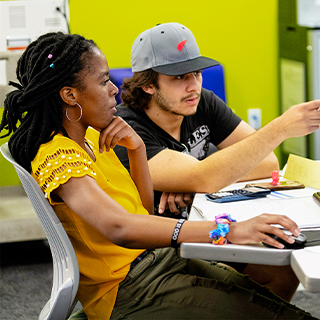 According to Walker, SI leaders need both personality and passion. They need not only to be able to impart knowledge, but also to “model the way” for the other students—participating in discussions, taking notes, asking questions. “Other students who generally sit in the back with headphones on may start thinking that maybe they should get a notebook,” she said. “The SI leaders are the premier students every teacher would want in class.”

SI leaders earn, on average, about $13 for every hour spent in the class, every session and every conference with the faculty member. That’s about $1,200 for a three-semester-hour class. “A pretty good gig for the SI leaders,” Walker said.

Money aside, there are ancillary benefits to the SI leaders. “It helps you polish your skills, and you develop the love for transferring and sharing information,” said Brunilda Santiago, a TCC Southeast faculty member who was the first SI coordinator at the campus, “and if you can explain something, that’s when you can truly say you understand it.”

Harrison, a student in SI classes before becoming a leader, agrees. “Not everything a faculty member says is important, but some things are incredibly important” she said. “So being able to pinpoint those as an SI leader made me better able to do that when I’m a student listening to a lecture.” 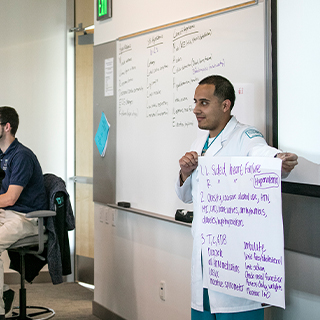 “It really helped me because you have to have time management and be able to engage people with different personalities and still be professional,” said Cindy Ramirez, also a veteran of SI classes. “Students would ask questions that made me think and make sure I knew the right answer and how to answer appropriately, and that benefited me tremendously.”

Supplemental Instruction can make for some improvement in faculty members. “Absolutely,” Azimi said, “because there are some things that they (his students) won’t tell me, but they’ll share with their SI leader. So, it’s very beneficial.” And Vu recalled instances where SI leaders, who had taken his class, were able to point out important information that somehow had not been brought out in a lecture.

But such extra benefits of SI, in addition to being unquantifiable, are beside the point—which is to improve student success, and there are plenty of figures showing that SI does just that. According to a report by TCC’s Office of Institutional Research, the 1,805 students who participated in Fall 2018 SI sessions had a success rate—earning a grade of C or better—almost 20 percent higher than non-participants and withdrew from, or “dropped” the class, about half as often. 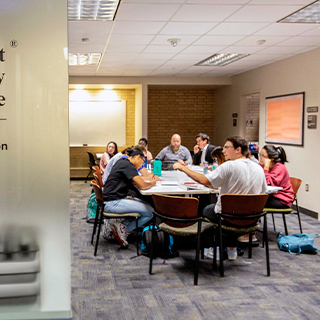 The success rate gaps within some courses were notable. Students who attended SI sessions of Biology 2401 —Anatomy and Physiology II succeeded at a rate of 82.8 percent against 52.9 percent for non-attendees. In History 1301—U.S. History I, the success rates were 91.4 compared to 69.4 percent.

Sadly, however, most of the students in SI sections don’t take advantage of the program. About 57 percent don’t make it to a single session and, overall, their grades suffer as a consequence. “The students who participate make almost a full letter grade higher than their peers,” Walker said. “And not only do they make higher grades, but they retain more, and that shows up in subsequent classes.” 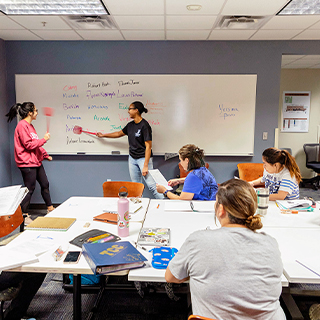 The faculty do their best to encourage participation. “I’m the cheerleader,” Santiago said. “On the first day of class, I introduce the SI leader and throw in the stats of my students who attended the sessions last semester.”

Vu said he virtually threatens his students, telling them they’ll regret it if they don’t embrace SI. But Kelly Wiggins at TCC South takes the opposite approach. “I usually start out by saying, ‘I’m not your mama. However, I’m older than you, and I know a thing or two and I promise you that if you go to SI, you’ll be glad you did.’”

Wiggins realizes that many students have other demands on their time, such as work and family, but said they need to think long-term. “I totally empathize,” she said, “but I tell them, ‘If you can back off work just a little, it’ll pay off in the long run.’ There’s no elevator to success; it’s all stairs.”

Supplemental Instruction can’t claim all the credit for increased grades. Since participation is voluntary, it follows that it’s the highly motivated students who elect to participate. And such students are likely to make better grades regardless.

That was the case with Harrison, whose goal is medical school. “From the first day of class, I was determined to do well by any means,” she said. “I figured that it (SI) couldn’t hurt me and might help me, so I had no hesitation.”

“I thought this was exactly what I needed,” said Ramirez, “especially with the sign language program, which is so difficult. As a student, you want to learn more, and SI was just another resource. I was very excited to go and attend.”

You interact with the material in a different way than you would if you were studying by yourself. When you have students collaborating and talking together, you understand it at a deeper level. Supplemental Instruction makes you a better student and helps you build relationships with people. It has been pretty transformational for me.