Dale “Dutch” Baughman likes to paraphrase Henry David Thoreau for his class at TCC Northeast. No, he doesn’t teach English, but a Senior Education course in fly fishing. “Fishermen may go an entire lifetime,” he tells his students, “and never realize that it’s not about the fish.”

Thoreau was an ardent fisherman but wasn’t all that interested in catching fish. It was the totality of the experience at Walden Pond that enraptured him. 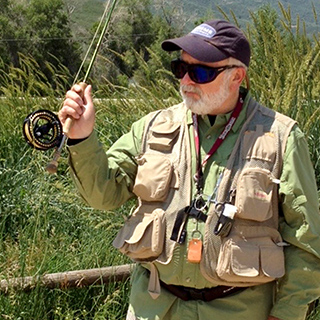 And so, while Baughman’s curriculum includes rods and reels, casting techniques and tying “flies” (the hooked lures that give the sport its name), he also teaches how best to approach the sport—deliberately, unhurriedly and with “respect and reverence” for the river and fish.

Like most youngsters in rural Texas, Baughman fished for bass and crappie. Then he saw a photograph in a magazine of a fly fisher holding a rainbow trout. “I saw that there was a whole new element to fishing,” he said, “where people would dress material onto a hook and cast it into a river to imitate aquatic insects.”

He read everything he could find on fly fishing, tied his first fly with hair cut from his dog and thread from his mother’s sewing basket. “No pun intended,” he said, “but I was hooked.”

Baughman is as dedicated to teaching fly fishing as he is to practicing it. He’s vice president of the Fly Fishers International Board of Directors and chairs the organization’s Education Committee. He wrote the FFI’s Comprehensive Introduction to Fly Fishing, has taught throughout the country and was named by the FFI as 2019 Fly Fisher of the Year.

Much of the modern interest in fly fishing began with the 1992 film, A River Runs Through It, based on the book by Norman Maclean. Viewers were entranced at the sight of an angler, standing in a picturesque stream gracefully whipping a rod back and forth before casting the fly so that it lit lightly on the surface—irresistible to a hungry trout or salmon.

The Chicago Tribune wrote that the film “fueled a boom in an esoteric sport.” Baughman’s opinion was that all of the sudden, devotees just wanted to look like Brad Pitt.

But it was natural, having spent most of his professional career in higher education as a coach and athletic director at five universities, that he would eventually teach fly fishing at a college. “Somebody I’d had in a class somewhere called TCC and said, ‘Here’s a class you ought to have,’” he said. “I contacted them, sent them a syllabus and an information about my background, and they called back and said, ‘Absolutely. We’d love to schedule this.’” 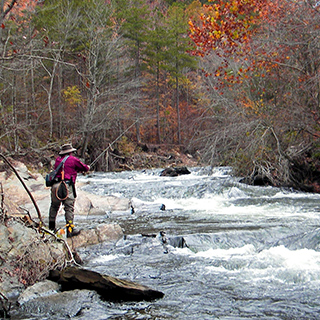 Debra Sykes-West, coordinator of community education at TCC Northeast, remembers that another instructor knew Dutch and his passion for fly fishing and said it would be a great thing for the seniors program. “So, his passion and her advocacy brought it to us as a prize course,” she said.

The course was an instant hit when it debuted in fall 2017. “It has been from the beginning a high-demand course and a high-participation course,” Sykes-West said. “Sometimes you have only a handful of people, maybe by word of mouth, who sign up for it. But from the very start we had people from all over the county.”

Like Baughman, many of them have developed an unquenchable thirst for knowledge about fly fishing and have enrolled for all six sessions. “I used to call them slow learners,” Baughman said. “Now, I call them alumni.”

One such student is Hal Scherrieb, a retired aerospace engineer from Arlington. Much like Baughman, he had seen a friend’s pictures of fly fishing in Montana. “I wanted to get in that picture,” he said. “But not only did I not have fly fishing experience, I had no fishing experience at all.”

Scherrieb keeps coming back, first of all, “because the instructor is super interesting, super informative. He makes each class a little different.” Then, too, there’s the camaraderie. He and some classmates meet up for dinner about an hour before the class starts and stay to talk after it’s finished.

Classroom instruction features slide presentations on types of gear and how to use them, types of flies and how to tie them, information on types of fish, tips on catching them and how to “read the anatomy” of a river so as to know the most likely fish hangouts.

The class goes outdoors to practice casting, but not, as one might think, at the pond on the southeast corner of the campus—too much vegetation around the bank. Instead, the casting is done on a tennis court on loan from the Kinesiology Department, which also provides gym space in bad weather.

Other TCC students, watching the rhythmic, graceful casting, have asked if an undergraduate class could be arranged. The faculty seemed willing, but Baughman had doubts. “I so enjoy the appreciation and the passion that the seniors develop for this,” he said, “and I’m not sure that would be the case with the younger folks.

The class starts at 7 p.m. and is supposed to end at 8:30, but Scherrieb and his buddies usually hang around for perhaps another hour. That’s when Baughman is at his passionate best, recounting his travels and adventures, letting some the magic rub off on his students.

“Once Dutch gets going, time just melts,” Scherrieb said, like when he tells the story of his first steelhead trout.

At age 10, Baughman implored his father to take him fishing for steelheads, a variety of salmon that live in the sea—but come upriver to spawn. “Not so fast,” his dad said. First, he had to study everything he could about the fish, its habits and habitats. At last, they headed for the Pacific Northwest.

“The rod I had was my grandfather’s, and it was so big I had to use two hands,” he said. “I was absolutely blessed that first time, and it was such an overwhelming experience.” 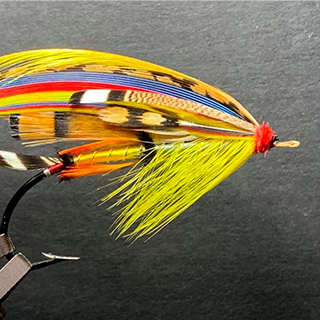 Baughman was able to get a strike on his fly from one of the notoriously wary steelheads, and then began to battle to get it to get it to shore. “So, I caught this fish, and I’m ‘playing’ him, and it took me 40 minutes. One of the techniques is that you back into shallower water, getting the fish closer, until you can reach out and pull the fish to you. Then you can kneel down, put a hand around the tail and take the hook out and cradle with your hand under their mouth.”

Finally, after the months of studying and dreaming, he held a steelhead in his hands. “I just marveled,” he said. “His color was… I can’t describe it. It was extraordinary. And I looked at this fish, rolled it back and forth, said a prayer for it and released it. And then I had to go sit down. I couldn’t even hold my rod.”

Now, decades later, it’s the same. He catches a steelhead, cradles it, says a prayer and, after watching the fish swim away, has to sit down and treasure the moment.

It is stories like this that have infused Scherrieb and his classmates to get ever deeper into the world of fly fishing, to dream about going to the Northwest and having that kind of epiphany. And that cadre of converts will continue to grow. Fly Fishing I and II will be offered next fall.

“I’m very serious about teaching fly fishing because I know what it’s done for me,” Baughman said. “And any chance I have to share that with someone else, I’ve gotta do it so they can have that same experience in their lifetime.”

For more information about Senior Ed classes available at TCC Northeast, contact the Community Education and Engagement office at 817-515-6500.