J. Ardis Bell, M.D., last surviving member of the original Tarrant County College Board of Trustees, died on March 22 at the age of 95, leaving behind a half-century legacy in medicine, education and community service.

Louise Appleman, who worked alongside Bell from her election to TCC’s Board in 1988 and succeeded him as board president after his retirement in 2008, called him “the epitome of dignity, decorum and decisionmaking.”

“He had a great instinct for what was best for the College and its stakeholders,” Appleman said.

He was a role model for and mentor to all of us who were fortunate enough to serve with him.

Louise Appleman
Past President TCC Board 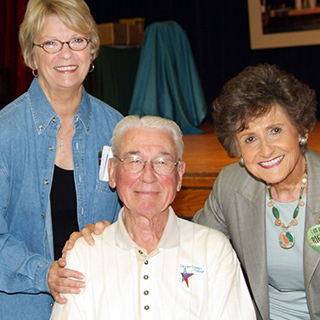 Bell was born in Fort Worth and was a 1942 graduate of Fort Worth’s Arlington Heights High School. He enlisted in the Navy at the start of World War II and was assigned as an aide in his ship’s sickbay, where he developed a keen interest in medicine. The ship physician took note and urged him to go to college and medical school after the war. He did so, earning a Bachelor of Science degree from UT-Austin in 1949 and his M.D. from the UT Medical Branch in Galveston in 1955.

Bell was a charter member of the Hurst-Euless-Bedford Rotary Club in 1962 and served as its first president. He was very active in the Haltom-Richland Chamber of Commerce and served as vice president and president of the Chamber’s Board of Directors. He also was chief of staff of Glenview Hospital in 1979 and was Richland Hills’ chief health officer.

It was through his work with the Chamber and the Rotary Club that in 1963 he became deeply involved in the project that would change not only his life, but also the face of education in Tarrant County: the creation of Tarrant County Junior College, now TCC.

A speaker at the Rotary Club convinced Bell of the need for a junior college. “We felt there was a need on the part of people who did not really seek four years of academic training,” he said years later. “Also, we felt there was a need for more technical-vocational training. And we brought up the idea—and I think this has been borne out—that there are probably a lot of people who think they’re ‘too old’ for a university setting and might be interested in a junior college.”

He was working with a Chamber task force to explore establishing a junior college in Northeast Tarrant County when the group became aware of a parallel effort in Fort Worth, led by attorney Jenkins Garrett. The two groups merged, formed a steering committee and early in 1965 succeeded in calling an election to establish a countywide college. Bell was one of the seven candidates put forward by the committee for election to the Board of Trustees.

In the months leading up to the July 31, 1965, election, Bell, his fellow candidates and others on the steering committee spoke before every audience they could find—service clubs, labor organizations, women’s clubs and church groups throughout the county to enlist their support. “Ignorance was a bigger thing to overcome than any opposition to the idea,” Bell said later. “What was a junior college? Why did we need another college in Tarrant County when we already had three? [Texas Christian University, Texas Wesleyan College and UT-Arlington]. Even up to the day of the election, there was some doubt we had convinced the voters. I really, deep down, thought it would pass, but here was something that to most people was new.”

Although many on the steering committee were polished orators, Bell did not count himself among them. “I guess the thing I remember most,” he said, “is my knees knocking when I had to get up to address someone. But I had a sincere drive and desire, and I guess my fear was one of whether I could get my point across.” 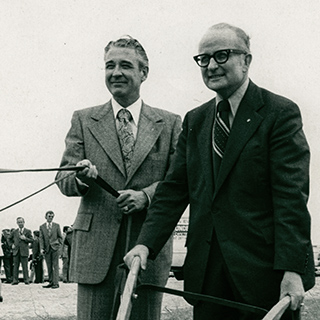 Voters approved creation of the College by a 2-to-1 margin, and Bell began 43 years of service on the Board of Trustees. He was elected the Board’s vice president in 1972 and president in 1976. One of his first tasks in that position was surely one of his most unusual. Looking for a different twist to a groundbreaking for the new TCC Northwest, Joe Rushing, TCC’s founding chancellor, proposed that he and Bell do the job with a plow drawn by a brace of mules.

“Well, of course, Joe Rushing had been reared on a farm, and he knew how to use a mule to plow,” Bell remembered. “I didn’t, but I grabbed ahold as if I knew what I was doing, but that was quite a thrill all right.”

After guiding the College through one of its most difficult times—the purchase of the Radio Shack headquarters that became TCC Trinity River—he decided, at age 84, it was time to turn over a different set of reins, retiring from the Board in May, 2008. The TCC Northeast Library was named for him a month later.

“Dr. Bell was a perfect choice to chair TCC’s Board,” said Tahita Fulkerson, retired president of Trinity River. “His calm demeanor and consistent quiet courage reassured us when hard decisions had to be made. His thoughtful way of listening enabled us to know that each person’s comments about issues mattered and that he was giving them full consideration. His warm smile, his eye contact, his amazing memory for names made all of us—faculty, staff, administration—feel valued and appreciated.”

Dr. Bell held the TCC family together for decades through his deep love of the College and his faith in its value and future. He was just what a good leader should be—calm, collected, thoughtful and decisive.

Bell was preceded in death by Doris, his wife of 57 years. He is survived by six children, including daughter Melody Bell Fowler, a former TCC Southeast English faculty member; six grandchildren; and two great-grandchildren.

There was no public funeral because of the COVID-19 pandemic, but the family said a memorial service would be conducted as soon as the situation is more favorable.

An Interview with Dr. Bell

Listen to a 2014 interview with J. Ardis Bell, the last founding member of the TCC Board of Trustees. You can also download the interview transcript (PDF)Listen.