On August 18, the United States will celebrate the 100th anniversary of women’s suffrage: the right to self-govern by voting. The right to vote gives citizens a voice in their government. Through voting, people decide how citizens and residents will be taxed, what curriculum children learn in school, and who gets to represent them to draft the nation’s laws. The vote gives the people power. And suffrage provided women with one very important way to access this power.

The fight for American women’s suffrage started before the Revolutionary War. Margaret Bent, a businesswoman who loaned money to newly arriving settlers, was the first among several colonial woman who demanded her right to vote. During the war, when the colonists met at the Continental Congress in 1776, Abigail Adams wrote to her husband, soon-to-be president John Adams, asking him to include women in the new government: “I would desire you would remember the ladies and be more generous and favorable to them than your ancestors. Do not put such unlimited power into the hands of the husbands.” Adams replied simply: “As to your extraordinary [request], I cannot but laugh.” After the war, New Jersey was the only state that allowed women to vote. And even then, only women and men who owned property and were not slaves were given suffrage and with it, the right of self-governance. 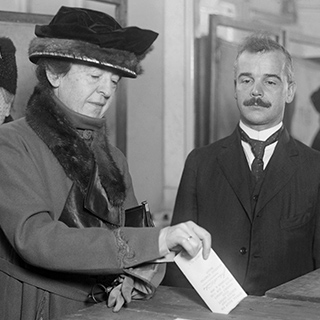 Decades later, the issue of women’s suffrage reached a flashpoint when a group of more than 300 prominent women and men, including Elizabeth Cady Stanton, Lucretia Mott and Frederick Douglass, met in 1848 at Seneca Falls, New York to draft the Declaration of Sentiments. Those at Seneca Falls modeled their work after the Declaration of Independence in an effort to hold the United States to its founding ideals. “We hold these truths to be self-evident,” they wrote, “that all men and women are created equal; that they are endowed by their Creator with certain inalienable rights; that among these are life, liberty and the pursuit of happiness.” The document contained a list of resolutions demanding women’s access to education, property, professional opportunity and the right to vote.

The narrative of women’s suffrage more often than not features upper-middle class white women. Elizabeth Cady Stanton, Susan B. Anthony, Reverend and Dr. Anna Howard Shaw and Carrie Chapman Catt are women most associated with securing the right to vote. However, the marginalized women who fought for the vote are no less important simply because historians of earlier eras disregarded them.

Frances Watkins Harper, a black poet and Underground Railroad supporter, encouraged white suffragists to include black women in the push for voting rights. At the National Women’s Rights Convention in 1866, Harper gave a speech titled, “We Are All Bound Up Together,” in which she forcefully spoke to the reality facing all subjugated Americans, especially women and most especially African American women who suffered the double-fisted blows of misogynoir. Harper posited that granting all women the right to vote was necessary to fulfill the promises of liberty.

Before the 19th Amendment was ratified in 1920, women’s suffrage was considered merely a states’ issue. Only a handful of western states granted women the right to vote. Even as late as 1912, the idea persisted among more conservative women suffragists that the best approach for gaining the vote was to slowly inch toward enfranchisement state by state. These women fought doggedly against more radical suffragists who demanded a federal amendment. When the Fifteenth Amendment was added to the Constitution, enfranchising black men with the vote, women felt betrayed. Women were told to wait; their time would come.

Charlotte Woodward was 19 years old when she signed the Declaration of Sentiments at Seneca Falls in 1848. On November 2, 1920, Woodward cast her vote for the first time. She was 91 years old and passed away only one year later. She was the only person from Seneca who lived to see the 19th Amendment ratified. 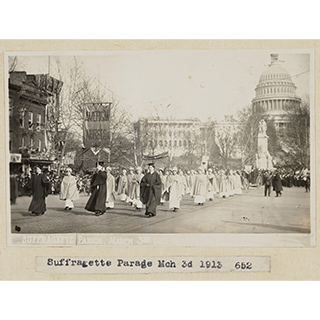 Even after women gained the right to vote, they still lacked equal rights granted to men by the Constitution. In 1873, the U.S. Supreme Court ruled in the case of Bradwell v. Illinois that equal protection under the law granted by the 14th Amendment only applied to men. Because this ruling had yet to be overturned, in 1923, Alice Paul wrote the Equal Rights Amendment to provide a constitutional guarantee of equal protection under the law for women.

Opponents of the amendment were abundant and included the indefatigable Phyllis Schlafly, who echoed the old calls of the anti-suffragists who believed that granting women rights would lead to the erosion of families and thus, the winnowing of society. “News flash,” Schlafly once wrote, “One reason a woman gets married is to be supported by her husband while caring for her children at home. So long as her husband earns a good income, she doesn’t care about ‘the pay gap’ between them.”

Ironically, Schlafly was able to advocate publicly against the ERA because of the suffragists who came before her — women who spent time away from their families by traveling cross-country delivering messages, graduating law school and meeting with members of Congress.

Not until 1971, when the Supreme Court overturned Bradwell v Illinois, would the 14th Amendment’s equal protection of laws apply to women. And not until 1972 did Congress finally propose Alice Paul’s Equal Rights Amendment. Earlier this year, Virginia became the 38th state to ratify the ERA, which satisfies the constitutional requirement allowing for the codified addition of amendments. Unfortunately, in their proposal in 1972, Congress added a time limit to the ERA’s ratification, meaning that in 1982 the ratification of the ERA expired and was defeated, falling short by only three states. Several states’ attorneys general are suing the federal government to allow for the ERA to be added to the constitution. To this day, the 14th Amendment still fails to fully extend equal protections under the law to women, particularly regarding issues such as equal pay and gender violence. Rights entirely pursuant to the American ethos of life, liberty and the pursuit of happiness.

Because such blatant inequality continues to persist against women, activists continue to fight in the struggle for equality forged by the women who came before them. One need not be an activist to make a difference. The more women engage in the political process, from voting to volunteering to running for office, the more power women have to take charge of their own lives. Let us not squander the efforts of our foremothers.