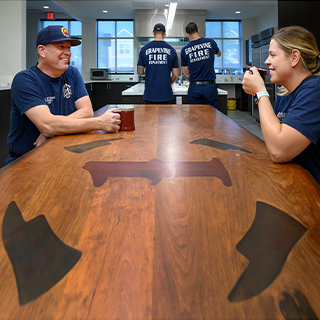 The fire service is often referred to as a brotherhood for the intensity of the bonds between firefighters. But the connection shared by Grapevine Fire Department colleagues (and Tarrant County College graduates) Morris Leondar and Marissa Sauble is even more profound than most.

That’s because Sauble is Leondar’s daughter. They are the first father-daughter pair in Grapevine Fire Department history.

“We’ve always been close, and this whole process has definitely strengthened our relationship even more,” says Sauble. “It’s fun.”

The family legacy started for a simple reason: Leondar needed a job. “I was recently divorced and had a small child to support,” he recalls. “So, I decided to get educated.”

The fire service seemed like a reliable choice. Leondar enrolled in TCC’s Fire Academy as part of class No. 7 in 1992.

He vividly remembers his young daughter looking on as he graduated from the academy.

“It was the greatest! Marissa was there and so proud of me, smiling with her missing teeth,” Leondar shares. 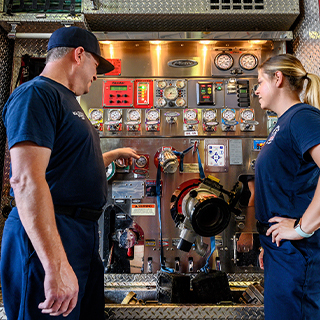 When he hired on with Grapevine Fire Department, Leondar found much more than a steady paycheck. He found his calling—and colleagues who were indeed like a family.

Of course, his actual family made visits to the station. And those visits would set Sauble on the road to her future career.

“For as far back as I can remember, I’ve been fascinated by the fire service,” she says. “I think it started when I would come up to the station as a child. We would eat dinner with the crew and look at all the apparatuses—the engine and the ambulance.”

As the years passed, Leondar knew Sauble was very proud of him. She signed him up for career day at school (because of his “cool job”) and one year, even donned his firefighting gear for Halloween. Even so, Leondar didn’t realize his daughter would follow his path. She actually didn’t really know either—until a terrible Tuesday in 2001.

“9/11 was the deciding factor in my career path, just like it was for many first responders in my generation,” Sauble says. “It was such an impactful event that changed everyone’s life.”

Sauble nurtured her interest in serving the  community by  joining her dad in the volunteer fire department in Aledo, where the family lived. She went on to enroll in TCC, just like her dad—beginning paramedic school in 2005. Sauble did her paramedic internship with Grapevine Fire Department (on the same shift worked by Dad). In  2020, she took the next step in her training by enrolling in TCC’s Fire Academy, class No. 91.

Leondar was impressed with how the TCC Fire Academy had grown and developed in the years since he was a cadet. “We had one classroom, one fire truck and a drill tower,” he says. Today, the College’s academy is a modern, high-tech facility spread across 22 acres at TCC Northwest.

TCC’s paramedic program and Fire Academy both had incredible instructors who were instrumental in my education. They gave me a great education that I’ll build on throughout my career. And now, some of those instructors are my coworkers.

But before her job came graduation. And when the ceremony rolled around, it was Leondar’s turn to look on with a grin—even though he had to do so from a computer screen, since COVID-19 forced a virtual graduation for Sauble’s class.

It was a proud moment for their whole family. “I was really happy that Marissa wanted to follow in her dad’s footsteps,” says Leondar’s wife, Kimberly. “I saw how much he enjoyed mentoring her as a volunteer for Aledo. They have a special bond, and she looks up to him for his dedication to public service.”

Those who know Sauble best weren’t surprised she chose firefighting. In addition to being the daughter of a firefighter, Sauble is married to one (he’s the fire marshal for North Richland Hills and, as it happens, a TCC student working toward an emergency management degree)—but Sauble did have one surprise in store for her dad. “When I found out she was going to test to work at Grapevine Fire Department, I was thinking, Really?” he remembers. “I was proud, scared and thrilled at the same moment. It’s one of the coolest things. I’m still in a little bit of a shock that my daughter is actually working here.”

The department’s leader is quick to return the praise—for father and daughter. “Morris and Marissa are fantastic human beings with a strong desire to serve others,” Chief Darrell Brown says.

Today, Sauble is a probationary firefighter-EMT-paramedic. “That means I am the new person on the crew,” she says. “I have a lot of learning to do to be really proficient in my craft. Learning never stops. Training never stops.”

Brown says Sauble got an excellent foundation at TCC. “From their college degree program to their certification classes, rescue certifications, swift water rescue training and recruit academy, TCC is known for a top-notch program. They have a fantastic history of turning out quality fire recruits.”

One of those recruits, Leondar, is now looking ahead toward retirement. In September 2024, he will mark 30 years of service with Grapevine Fire Department. While he plans to step down from his official role as a driver-engineer-firefighter-EMT at that time, he’ll remain connected to the fire service—through the Aledo Volunteer Fire Department and visiting his daughter at her station. In retirement, Leondar also will have more time to spend with his grandsons: Sauble’s 4- and 7-year-old boys, or “third-gens,” as the family has taken to calling them in anticipation of them carrying on the family tradition.

“Recently they have been consistently saying they want to be firefighters and to ‘help the boys and girls,’” says Sauble. “It makes me so happy that they have those ideas at such a young age.”