On Friday, March 7, 2020, the normal euphoria prior to TCC’s Spring Break was tinged with apprehension as the COVID-19 pandemic began to take hold. Then, the one-week break became two weeks, then two months. Spring melted into summer and the College family was still wondering when—and if—and how—they would be back.

Our day-to-day lives folded inward. We couldn’t go to a movie or a restaurant. We couldn’t visit Grandma in the nursing home. We prowled stores for toilet paper, searched the internet for hand sanitizer recipes and were home with our families perhaps more than might have been good for both them and us.

But we discovered that life goes on, that the signature days and events that mark our earthly passage continued, but hardly as usual. We learned to cope, to be inventive, to take the lemons dealt to us by the coronavirus and try to make lemon birthday cakes.

Life went on, some just beginning. 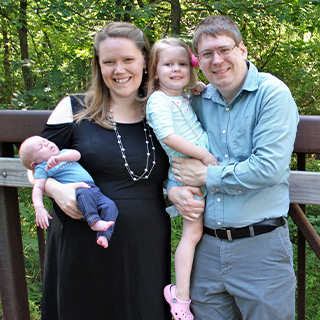 Pregnancy was stressful enough, but what most worried Kathleen Ahles (TCC Northeast) was the possibility of contracting the virus prior to baby Ethan’s birth. “They were separating COVID-positive moms from their babies,” she said, “and we really tried to make sure we didn’t contract it because I didn’t want to be separated from him.”

Then, too, there was the chance that husband Andrew wouldn’t be allowed in the delivery room. “That was terrifying,” she said. Fortunately, their hospital didn’t enact that policy.

Still, Andrew was the only family to be with her, both during delivery and in the hospital room, sleeping on a recliner. “Actually, that worked well for us because our first 36 hours were just with Ethan,” she said.

Ahles wasn’t the only family member sidelined because of the virus. Daughter Evelyn, 3, was missing her friends at the TCC Northeast Children’s Center and wasn’t sure that she wanted a sibling. All changed when everyone was home. She’s a big help, her mom says, and “likes to rub his little peach fuzz and say, ‘I love you, Baby Brother.’”

Life went on, some lives joined. 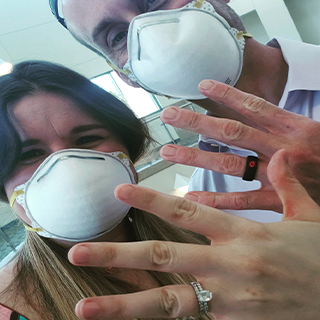 Lauren McClain had it all planned out. Turn in grades at TCC Northwest. Attend Commencement on May 9. Get married on May 22 in a small ceremony in a private room at the country club followed by a big reception dinner. Honeymoon. Back in time for Summer I.

COVID-19 had other plans.

“We rescheduled it (the dinner), but we just really wanted to be married,” she said. A justice of the peace would have to do, but nobody answered at the Dallas County Courthouse, and emails went unanswered. “So, we called over to Tarrant County, went and got our certificate and scheduled our ceremony for May 29. It was really nice. She (the JP) was very sweet; she had prepared something and made it her own. It was very moving and very quick!”

It was only the three of them—no one else allowed—and everyone wore masks, except when McClain and new husband Matthew pulled down their theirs for a quick kiss.

They had never settled on a place to honeymoon, but now that was no longer possible, even though Matthew had arranged for some time off. So, the newlyweds  were “just hanging out at home,” said McClain. The honeymoon? Maybe later…sometime, somewhere.

Life went on, including birthdays.

Pamela Quinn (TCC Northeast) was looking forward to a Big with a capital “B” birthday. “It was one of those decade things,” she said. “All the ones that end in zero are worth celebrating, but this was my 70th.”

Yet the big party, in the works since January, evaporated in March. Then, daughter Kelly Arbabi took over. “She had a great big sign put up in our front yard that read ‘Happy Birthday to Pippa Pam.’ Pippa is my ‘grandmother’ name.”

But there was much more to come. Arbabi finagled all of her mom’s contacts and asked them to surreptitiously send in congratulatory video clips. The replies, from 65 people in 16 states, ran more than two hours but was pared down to about 30 minutes.

On the night of the birthday, May 12, she sprung the surprise. Champagne corks popped, and the big screen TV was switched on. “It was just beautifully done,” Quinn said. “It was very entertaining, very personal—childhood friends, high school friends. This might have been better than a party.”

Life went on, and we celebrated graduations—sorta. 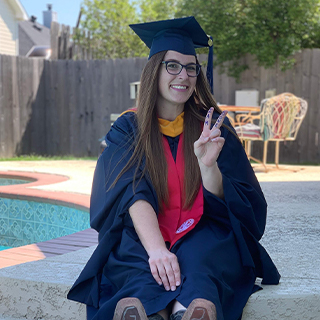 “Then we went on Spring Break,” she said, “and never came back.”

Sandivar was “very devastated” that there was to be no prom, even more so that there would be no walk-across-the-stage graduation. In fact, these seniors missed two ceremonies, one from high school and the other from TCC.

“Not only was it our accomplishment,” she said, “but also that of our parents. So, it wasn’t only not celebrating among my classmates, but it would have been way to let my family know that if it wasn’t for them, it wouldn’t have been possible.”

MaryLynn Young’s family knew that this birthday on March 25, her 87th, might well be her last, so daughter Ashley Burgardt (TCC Northeast), with whom she was living, decided that a party was in order.

“Of course, no one could come visit because of COVID, so my daughter arranged a Zoom party,” Burgardt said. “It was just wonderful. We had my brothers, my nieces, all her grandchildren and great- grandchildren. We all sang ‘Happy Birthday,’ and you could see the joy on her face.”

But MaryLynn’s numerous health problems cascaded shortly thereafter, and she passed away on May 6. “We knew it might be her last birthday,” Burgardt said, “but we didn’t expect her to go so soon.”

The memorial service, of course, will have to wait.

The ways we celebrated—and grieved—during the pandemic were hardly normal. They were not what we wanted, only what we could manage, but we found ways that, if not perfect, were by no means completely inadequate.

MaryLynn Young’s family can hold and treasure that joyful smile.

Whereas in other times the world might have intruded, Ahles and McClain had some precious “just us” time, Ahles with her husband and newborn son and McClain with her new husband.

Sandivar did have a virtual graduation ceremony complete with a 10-second farewell by each member of the 87-member senior class. In hers, she thanked her family for their “unconditional support.”

And Quinn has her video to watch and re-watch. “You know, a lot of people have videos made for their funerals,” she said. “I get to see mine while still alive.” 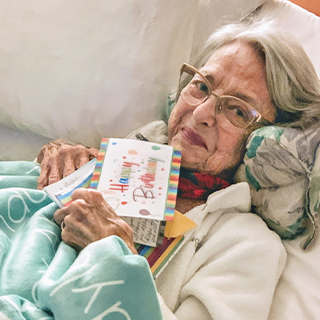