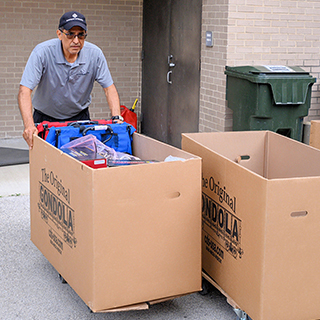 It was June 24, 2021, and the May Owen Center, home to Tarrant County College’s administrative offices since 1983, was in chaos. “Boxes are everywhere,” said Vice Chancellor Reginald Gates. In just a few days, all would be quiet as employees moved to new digs at TCC Trinity River.

Turn the clock back to March 3, 1983. Same picture. “Boxes were everywhere,” said Associate Vice Chancellor Nancy Chang. The difference was that these boxes were coming in, not going out.

The building’s days as a TCC facility likely were numbered when the College moved into West Fork, the last part of Trinity River to be occupied. It made fiscal sense, the Board of Trustees decided in 2019, to move into space already owned by TCC and to put the MOC up for sale.

Growing pains had been the norm for TCC campuses in their early decades, and the central offices were by no means immune. They had been in the Electric Service Building at 7th and Houston in downtown Fort Worth since 1966 and by the late ‘70s had taken up the entire 14th floor and were spreading, like an invasive plant, to the floor below.

Clearly it was time to move, but where?

Actually, just down the street.

The area between 8th Street and Lancaster Ave. had an unsavory reputation going back to before the turn of the century with a proliferation of bars and brothels. Fort Worth citizens called it Hell’s Half-Acre, but the more genteel name was Lower Main, and people said that Lower Main got lower and lower every year.

By 1960, most of the saloons and salons had been shuttered, but the area remained an eyesore with empty storefronts and derelict buildings. Travelers arriving at the Texas and Pacific train depot, if they were on foot, had to traverse the area before reaching the more refined part of downtown. 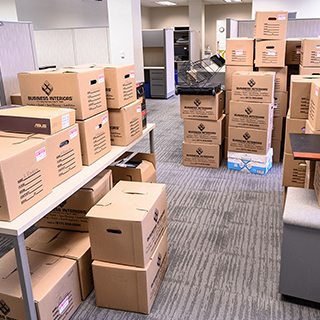 It certainly wasn’t what the city leaders wanted as a front door, so they created the Chamber of Commerce Development Corporation that bought up a large swath of the area, much of which was used for the Fort Worth Convention Center and, later, the Fort Worth Water Gardens. By 1981, the only parcels left were 32,000 square feet on a block bounded by 14th Street, Lancaster, Houston and Throckmorton and a 16,000-square-foot piece on the west side of Throckmorton. The College snapped up both for a total price of $840,400, hired an architect and in March 1982, awarded a $2.2 million construction contract.

The new headquarters needed a name, and in September, Trustee John Lamond moved the name May C. Owen District Center be approved. This was a surprise, and an unpleasant one, to the venerable Trustee Owen, who objected naming it for anyone, particularly her. “And where in the world did you get ‘Macy’?” she grumped. Lamond repeated the motion only to told by Owen that she didn’t have a middle name or initial. “Good, Dr. Owen,” he responded. “You just saved us $5 on the sign.”

After all the boxes were unpacked and people settled in, the building was formally dedicated in a ceremony on April 15. It went off without a hitch… except when an honor guard was supposed to march shoulder to shoulder to the flagpole just inside the parking lot. The lot was packed with haphazardly parked vehicles, though, so that the flag bearers had to snake their way around in single file.

The College did not have, nor did it at that time desire, a downtown campus, but Chancellor Joe Rushing wanted an educational footprint in the central business district. So it was that half of the bottom floor was given over to classrooms designed to serve downtown with classes in business, accounting and office administration. To help publicize the classes, some MOC employees took handfuls of brochures and flyers up the street and fanned out like proselytizing missionaries, handing out literature to any who would take it.

The MOC classes never really caught on and over the years, the classrooms got gobbled up by offices. The last surviving classroom, used for health science courses, featured a life-sized skeleton model that was trotted out to the lobby each Halloween.

Eventually, it was time for another move and when they went to new quarters at Trinity River in June, MOC employees took, along with boxes containing everything from files to family photos, as many as 38 years of memories. 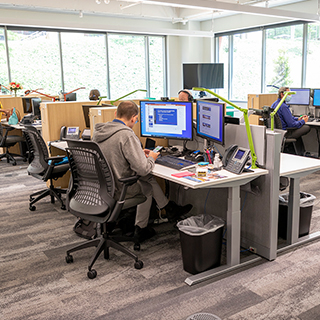 The best part of the MOC, for Chang, was not the building, but what was next to it. “We finally had our own parking lot,” she said, “and no longer had to walk for blocks.” But there were drawbacks. “We were pretty far away from everything,” she said, “too far to go shopping on our lunch hour.”

Like Chang, Lynn Tisby in Human Resources was one of the MOC originals and remembers that the standard explanation for a missing document was that it must have been lost in the move. “I think we used that excuse for the first two years,” she said.

Since there wasn’t much within walking distance, she recalled, brown bags became popular, and people interacted more with one another. “I remember the holidays best,” she said. “Business Services would have an open house before Christmas and Human Resources had a big lunch at Thanksgiving. We all depended on each other, came together and became a family.”

Now, the family has moved once more, and the collection of memories must start anew.