The TCC Trinity River audience cheered as the candidates took the stage on an October afternoon in 2019—Biden, Harris, Buttigieg, Warren, Sanders. For more than an hour they defended their own views while attacking those of their opponents.

It was great political theater. Actually, it was genuine theater since the “candidates” were played by faculty and staff in just one of the College’s many efforts to promote student civic engagement. Others, while perhaps not as flamboyant, have included “I‘m a voter” masks, a voting information hotline, a how-to-vote video and presentations on everything from “fake news” to the Electoral College.

The role of civic engagement in Texas colleges and universities was formalized in 2012 when the Higher Education Coordinating Board formulated its statement of core objectives, among which was “social responsibility,” which has since been defined to include civic engagement.

Yet, TCC had its champions years earlier, particularly Joan Johnson, whose contributions draw praise bordering on awe from her colleagues. Murray Fortner, who picked up the mantle when Johnson moved from TCC Northeast to TCC Connect, said, “Her energy and commitment to this cause were invaluable. The output for our campus is directly the result of her input.” 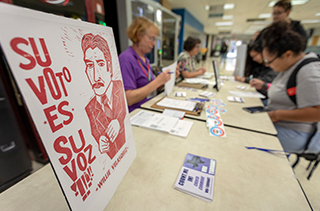 Johnson preached student engagement to her Government classes “from day one,” which was in the mid ’90s when she was an adjunct at TCC Northwest. Later, as a department chair at Northeast, she had a lot of opportunities to create different programs, leading the drive for designation as a “Voter Friendly Campus” and connecting the College to national organizations such as “All-In” and “Ask Every Student.” Each year she arranged a forum for mayors of municipalities in northeast Tarrant County. Her students drafted the questions and acted as moderators.

One of Johnson’s favorite assignments is to have every student research an issue of importance to them, whether local, state or federal, and write and mail a letter stating their views to whomever oversees that issue, be it a U.S. senator or a local city council member. “One of my outcomes for every government class I teach is not just that students learn about government, but that they take their opinions and do something with them,” she said.

Johnson wasn’t the only one to use her position to promote student civic engagement. Bill Coppola had been huge proponent during his tenure as a vice president in the Lone Star College system and brought his ardor for civic engagement to TCC Southeast as president in 2012. He also brought membership in Campus Compact, a national organization of colleges and universities promoting civil and social responsibility.

“I was on the executive board,” he said. “So, I brought it here and got the faculty involved. We didn’t push it, but we wanted to make sure that understanding our responsibility of producing civically engaged students is everybody’s job, not just the political science and history faculty.” 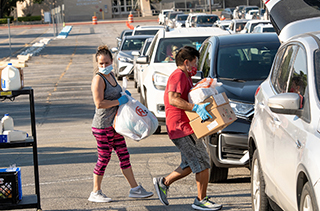 Kristan Foust, associate professor of History, was one of Coppola’s faculty members who answered the call, even though she’s always tried to stay away from politics, concentrating instead on community service. “But somewhere along the way it clicked for me that some of the best ways to fix these social problems is through politics, through policy. People say, ‘I hate politics,’ I answer. ‘We all hate politics but that’s not the point.’”

TCC Northeast and TCC Southeast may have set the pace, but the other campuses were catching on and catching up. Still, student civic engagement was here and there, bits and pieces, fits and starts with no real cohesion. Coppola saw the need for a District committee. “The faculty knew one another,” he said, “so we pulled a group together and talked about how to introduce this. They had some fabulous ideas as to how to get students involved and how to get disciplines outside of Government and History involved—biology for climate change, for instance.”

The committee now has representatives from all six campuses who meet to share ideas that are developed into recommendations sent forward to the Chancellor’s Office for approval.

The committee’s work resulted in TCC winning the 2022 Eduardo J. Padron Award for Institutional Transformation given annually by Campus Compact. While TCC Southeast was designated as the winning institution, the nomination narrative, compiled by Foust, included measures undertaken at the District level, such as creation of a civic engagement web page, a Districtwide plan for voter registration and the transmissions of presentations and webinars from the originating campus to all others. 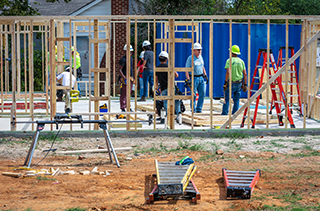 “Every issue, but also every accomplishment, is a College one. It’s not the campus,” Coppola said, adding that the recommendations from the civic engagement work team are not intended to shackle campus creativity. “It’s an umbrella. The work group sets the baseline, but we have six campuses that serve different populations. So, what might be civic engagement for TCC South in areas of Fort Worth might be different than what it is to us in Arlington.”

It’s also different from student to student. After all, “engagement” is a fluid term. It can mean staffing a voter registration booth, making a video, working at a food pantry, chairing a committee. On the other hand, it can be an individual journey, with students such as TCC Northwest’s Natalie Tajada asking questions and seeking information to make informed choices in the voting booth.

Tajada cast her first vote in the 2020 presidential election, troubled by factions and polarization. “I just wanted to try to make a difference,” she said.

Her horizons broadened while working on campus for Coordinator of Special Projects Lou Davenport, who urged her to think about expanding her votes to local and state races. “I decided to really try to educate myself and go out and vote to make a difference locally,” she said. “You have leaders at school and at work and then you go beyond that and wonder, who’s leading this society? Who’s making these rules we must follow?” 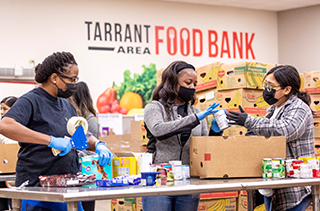 TCC student Jeni Green began her engagement in high school as a member of her campus’ student council and the Key Club; she continued her involvement at TCC Southeast with membership in the Student Government Association as well as the Phi Theta Kappa and Sigma Delta Kappa honor societies. She’s handed out donuts to promote voter registration, helped organize a Socktober socks drive for Mission Arlington and set up an umbrella drive benefiting Arlington ISD’s Kooken Educational Center for early childhood development.

Community engagement is one way, Green said, to get your name out there—not her name, TCC’s name. “Having people in the community know who you are means a lot,” she said. “It’ll be something they look at positively so that, when you approach them for other things, they’re more likely to want to help with those things, as well.”

Yes, there are personal benefits. “I’ve gotten to build skills that will go with me for the rest of my life,” Green shared, “My communication skills and level of professionalism have increased through my involvement with different organizations, and it’s helped me with my sense of empathy on different subjects. It’s caused me to do more research on diverse ways I can help my community.” 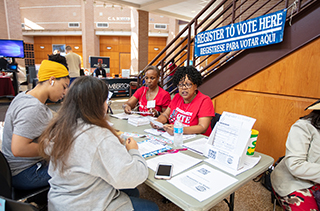 TCC’s civic engagement awareness isn’t directed only at students. Workshops, teaching materials, video presentations and other resources have been made available to faculty from all disciplines along with samples showing how civic engagement can be promoted in areas as diverse as Culinary Arts and Physical Education.

Civic engagement also isn’t directed only at what goes on outside the campus. “Student government will come to me with changes they want,” Coppola said. “One of them was that they wanted to increase the number of recycling bins or ways to recycle. So, they polled the data, did the research, didn’t come in and just say, ‘We need more bins.’”

Plans are well underway for a voter registration program leading up to the fall 2022 election, but that’s just a beginning.

Registering students to vote is just what we do—what we’ve always done. We look at civic engagement as more of an awareness of how you make change.

“How can you make change in your community without a riot or anything?

“There is a method, a political method, to make change—to have individuals understand that yes, have a voice,” he continues. “And with the little bit we give them here, when they leave us and are approached with something they don’t feel is right, they know how to responsibly address that issue rather than be reactive to it.”

Green agrees. “It might not seem important to them at the moment,” she said of fellow students, “but in the grand scheme of things, getting their voice out there can help them be better aligned with their moral compass and the things they believe in. It can help them influence others positively and will help them feel like they’ve made an impact on their community.”