We tend to measure time by events that occur regularly. Some we welcome: the robin in spring, holidays, birthdays (mostly). Others we would just as soon do without—taxes, insurance policy renewals, certain medical exams.

To this latter list, governmental entities might add redistricting, the reapportioning of voters into single-member districts mandated to follow every decennial census. The process can pit neighbors and ethnic groups against one another and turn governing board meetings into shouting matches, over concerns about an unfair process.

But not at Tarrant County College.

Lisa McBride, a partner at Thompson & Horton and one of the attorneys guiding TCC’s Board of Trustees through the process, was asked to assess the task.“I think it’s been very amiable,” she said.“I’d put it on the side of very, very smooth.”

Jessie Gaines, her colleague and a veteran of decades of redistricting cases, concurred.“I’ve found that, out of all the entities I’ve worked with, Tarrant County College has been a most congenial group of individuals. You’ve not had any knock-down, drag-outs. Maybe it’s because community colleges are different than cities and counties with personalities who may have different agendas. TCC has an agenda of education, and sometimes that makes things more congenial.”

Because everybody comes together on education. I really do believe that as we educate and impact families, we build stronger communities, and nobody’s against that.

Ayala had some experience with redistricting, having served on a task force for the City of Fort Worth, but she had no clear idea of what to expect in this specific situation. “I didn’t think it was going to be easy, and I didn’t think it was going to be super difficult—just somewhere in the middle.” She knew changes in Tarrant County growth patterns would dictate some changes but wasn’t certain how many and whom they would affect.“Did that mean we were going to have to add another board member?” she said. “I just didn’t know.”

Gaines also had high praise for the board members on their preparation from materials sent to them prior to meetings.“It included a lot of data, mathematical calculations and maps and lines that are moving, and different graphic figures,” he said. “They had a complete knowledge of all that. They asked good questions.”

Ayala took the praise as a compliment, not only for board members but also for the staff that kept them informed.“Carol [Bracken, TCCD associate general counsel] has always been very proactive about informing us, preparing us and communicating what we should anticipate. Her efforts made it seem seamless.”

McBride said that one strategy she uses to limit personal agendas is to start the process by laying out nine potential criteria to be considered in drawing up single-member districts or adjusting current district boundaries. Four of the criteria are mandated by law. The population of the largest district cannot exceed the population of the smallest by 10 percent or more. All other districts must follow similar rules so that they are nearly equal in population. Districts must be compact and continuous; they can’t consist of pockets of voters here and there.

Finally, the voting rights of minority residents must be protected. While the section of the Voting Rights Act calling for all changes in district boundaries to be reviewed by the Department of Justice has been dropped, minority citizens still have recourse through remaining portions of the Voting Rights Act against drawing any district that would unduly reduce the ability of an ethnic group to elect one of their own.

If the board members’ collegiality very likely reduced possibility of fussing, another factor was that there wasn’t all that much to fuss about. The initial map, Plan 1, was tweaked in order to preserve constituent contiguity, and it will be Plan 2 that will be sent out for public comment. The changes involved only 1,910 people out of the county total of 2,110,564. 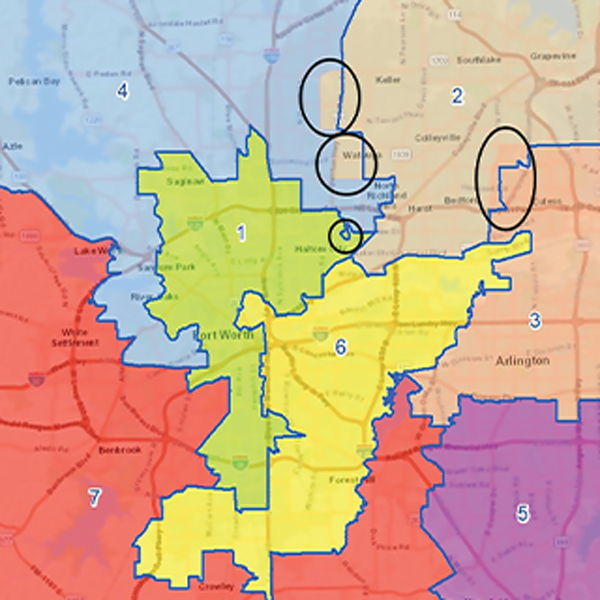 Still, while changes to single-member district demographics can create friction in some governmental entities, McBride noted that the extent of the bitterness often depends on other factors. “Redistricting brings out the best, or it brings out the worst,” she said. If the governing board already has internal turmoil, redistricting can exacerbate it. “But in a governing board where there is already harmony, this discussion [may add] stress, but it doesn’t sink the boat.”

Easy, right? But TCC’s initial experience with single-member districts was anything but.

In the legislative session of 1991, Texas State Rep. Garfield Thompson of Fort Worth introduced a bill that would require the board of Tarrant County Junior College (TCJC, as it was then known) to switch from at-large elections, in which candidates ran countywide, to the single-member format.

Most of the TCJC board thought it was a bad idea. Gwendolyn Morrison said her colleagues thought the move “unnecessary” and that the trustees were already pretty well spread around the county geographically.

Thompson was determined, however, and the Legislature and governor had shown themselves sympathetic to similar proposals. Times had changed, and the trustees had no choice but to change with them. But rather than be ordered to adopt single-member districts, the board bowed to the inevitable, and on July 18, 1991, adopted a resolution calling for a single-member district plan to be submitted that October.

Since then, the board has been a model of geographic and ethnic representation and thus made McBride’s and Gaines’ task easier to the point that now, 30 years later, the redistricting process is months ahead of schedule. All that remains is to put Plan 2 before the public on the College website, provide for written and in-person comments and then to take such comment under advisement before formal adoption of the new district borders (likely well in advance of the Feb. 5 deadline, 90 days before the next trustee election).

All of that has made TCC a model client for McBride and Gaines.“It’s been a wonderful relationship,” Gaines said, “and I appreciate their professionalism, their collegiality and their wonderful preparedness.”

Learn more about TCC’s redistricting for the Board of Trustees.