Amy Jennings, associate professor of dance at TCC Northwest, enters the room to find her class already seated. A few look up in expectation. Others look straight ahead or down at the floor.

She opens with soft music, encouraging her dancers to breathe deeply—from their core— and to raise their arms and look upward. Some follow her lead, but most do not. Participation might increase, or it might not. Jennings isn’t too surprised or concerned, for these are not her TCC students but residents of the James L. West Center for Dementia Care in Fort Worth.

Jennings began researching dance as dementia therapy seven years ago and has reached the point where she’s written up a case study to be published in the National Dance Society Journal in December. Her interest, however, is just as much personal as professional. The subject of the study is her mother, Andrea, who was diagnosed in 2014 with temporal lobe dementia, a condition much like Alzheimer’s and with the same outcome. 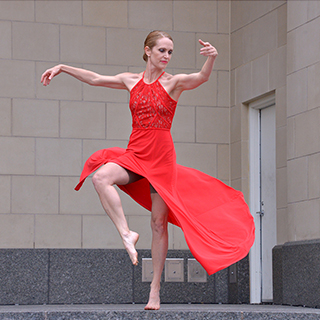 Three years later she choreographed “The Beauty of Dementia,” an ensemble work for her TCC dancers that she describes as “a focus of the walk and journey with my mom and dementia.” Narrating a mixed-media presentation with the same title, she speaks of having seen changes in her mother—behavior, forgetfulness, directions and anxiety. “This was really the beginning of my work to begin to launch into this new world of a person living with dementia, and it was my mom, at age 70,” she said.

The 17-minute dance program featured a solo, “Transmitting Messages,” by student Holly Tate, who remembered that it wasn’t until the first rehearsal that she knew what it all was about. “She gave me a little bit of information about how her mother had dementia and this process she’d been going through trying to figure it all out,” she said. “So, we took those little details and expanded them into movement that could be appreciated on an audience level. For me, it was a super intimate piece and it was the most amazing experience to go through that process. It was really extraordinary.”

While Jennings is not a licensed movement therapist with the required graduate study, she has read and attended workshops on dementia and earned her certification as a dementia caregiver through the West Center.

Her research centers on how music brings a rhythm to the body that can, in turn, bring about memories and unlock stories. “Really, the walk with my mom was as kind of a test subject,” she said. “How do I, with all I’ve learned and researched, engage the things I know about her where she is? Every person with dementia will struggle a little bit differently. So, I have these little vignettes of my mom and what has been and still is to walk through.”

Jennings’ walk with her mother has been one of discovery. “There are stories I never knew,” she said. “Then there are stories you know are not true because she’s in this dream world trying to pull things out that are a little bit true.”

She’s discovered, she says, that her mother “is finding the poetry of all God has created. Words and meanings deeper than I could have ever imagined, like ‘clouds without rain’ and ‘the whole top of the world turned blue.’”

Jennings cannot be her mother’s day-to-day caregiver. That’s the job of her father and the professionals in a personal care facility in western Pennsylvania. She does, however, have surrogates — dozens of them at the West Center. When she’s home, she sees people taking care of her mother. “And then I come here, and I’m with West Center residents and the community of Fort Worth, she said. “And everybody’s still finding a way to take care of others.”

It’s not an easy task. She has to approach the residents’ world instead of having them come into hers. “It’s frustrating because you have something you’re really wanting to offer and you know there will be a part of it that some days they’re not going to do,” she said. “Sometimes it’s about just living in that moment when the two worlds are working simultaneously.”

It’s also frustrating to the teacher in Jennings that her “lessons” don’t build on one another, week after week, as with TCC students. Dementia patients may remember last week only very dimly, or not at all. “You have to let go of some of your teaching expectations and just be in the moment of approaching them where they are that day,” Jennings said.

But then there are the rewards, not just the pleasure of having been of comfort, but the made-my-day sparks when she makes a connection, however brief. “It’s the moment where their eyes light up,” she said, “and you see this joy, or this reaction come out of their eyes.”

And, sometimes, it’s not just the eyes. Joy can come out in dance, when the body comes out of its shell, or in song, such as the time she put on a Temptations oldie and a burly, bearded guy in a military vet cap belted out the refrain to “My Girl.”

Jennings’ work is a labor of love.

Love, like labor, is an action word, and so is forgiveness. The three all work together to bear good fruit. Every person living with dementia is having trouble, and the soul can be damaged. So, we all labor together to cultivate the soul and the spirit.

She loves her dancers and the staff at the West Center, and they love her right back. “Her passion is contagious,” said Jamie Cobb, vice president of dementia and caregiver education. “She leaves our residents feeling better about themselves overall, and that sticks with them.

“She has the same effect on the staff members. There’s that focused attention on the residents engaged in that activity that they weren’t getting before she was here.” 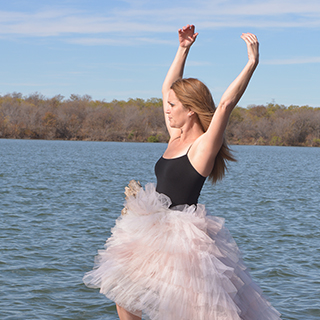 Jennings hopes her passion is contagious throughout the College, as well. She has been working with the Continuing Education staff at TCC Northwest on what she calls the Beloved Ballet Project, the goal of which is to have Active Aging Ballet and Dance for Dementia classes not only on Northwest, but on every TCC campus. The project, as with much else, has been in neutral during the pandemic, but she plans to jump start it with a seniors’ ballet class this fall.

It’s another part of her labor of love. “I’m reminded as we adjust back to campus, plates have been full for everyone,” she said, “so the labor of love has been like setting a table for dinner, then waiting with patience as all the guests arrive.”

She also plans to increase her outreach beyond TCC and to, with her student volunteers, put on classes for the West Center and for the Alzheimer’s Association of North Central Texas.

Jennings knows that her walk—her earthly walk—with her mother will end. “It’s hard,” she said. “It’s hard to watch your mom, who’s been so active all these years and to know that, eventually, something will come.”

Meanwhile, she’s grateful for all that has been and still will be, and she expresses that gratitude on the final slide of her media presentation. It shows two pair of feet lounging on a stone ledge overlooking a peaceful lawn. Under is a letter of thanksgiving to her mom—for inspiring her to dance, for letting her dance in the garage with the music turned up, for letting her try on an adult tutu and, finally …

“…for always welcoming me home and dancing with you in the moments where memory fades, but dance and music bring us back together. Love, Amy”