Serafin Garcia, director of campus services at TCC Northwest, wasn’t too far off the mark when he said last fall that it sometimes seemed as if everyone at TCC was helping to design “his” campus.

Indeed, the redevelopment of TCC Northwest has been a team effort, and that team extends beyond the campus faculty and staff to include almost 500 of their colleagues across the College, all members of the Three Goals and Eight Principles (3G8P) work teams and advisory committees.

The eight principles—Learning Commons, Integrated Instructional Learning Environments, Integrated Student Success Model, Student Experience, High Schools, Scheduling and Faculty Utilization, Campus Character and Quality, and Workspace Environments—undergird everything the College does and provides the blueprint for everything it will do—not just at TCC Northwest, but on every campus.

Stephanie Hill, who helps coordinate the 3G8P from the District offices, can’t get over the scope of the plan. “TCC is challenging the system of things,” she said. “We’re out to improve everything—the whole system. We are building—I don’t want to say a new institution—but a better version of ourselves within our current self.”

The TCC Northwest redevelopment is not 3G8P’s first project, but it is far and away the largest and most complex. It’s akin to completely rebuilding one’s house while still living in it.

Core elements of the campus, built in the 1970s, are being demolished in preparation for new buildings. As the new structures are completed, activities will move into them to free more older spaces for demolition.

TCC Northwest President Zarina Blankenbaker says her crew is ready. “The 3G8P implementation couldn’t have started at a better campus,” she said. “I don’t mean we’re better than the others, but if there was a group of people who could go with the flow, it’s Northwest. This campus is ready, was ready, was willing and was able to take on the magnitude of what is happening.” 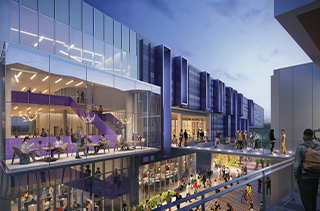 But, if TCC Northwest was ready, so were the eight Principle teams. They had been working since 2017, maintaining momentum even through the COVID shutdown. Through seemingly endless discussions, reams of research and occasional resets, they fleshed out the Principle statements and grew them into specific recommendations. Each Principle team has a story to tell of how their recommendations were hammered out and put into practice, but this article will deal with only one—Learning Commons.

The first step was to define just what, for TCC’s purposes, a Learning Commons is. The Principle statement refers fundamentally to libraries but was expanded to take in virtually all teaching and learning occurring outside the classroom—math labs, writing centers, reading labs and peer tutoring.

There were turf issues to be resolved. “On the tutoring side, there was a fear of being absorbed by the libraries,” said Alex Potemkin, library director at TCC Northwest. “Some people on the library side thought they were going to be absorbed by the other support systems.”

Sean Madison, president of TCC Trinity River and the Principle’s “champion”—a combination cheerleader, arbiter, ringmaster and mother hen—led the way. “It wasn’t an easy sell, but I think we were eager,” he said. “We knew we had to manage change, but I think we did it in a very creative way, a re-engineering approach.”

That meant not trying to fuse the two entities, which Madison said would be like “putting new wine in old wineskins,” but by putting students’ needs first. The objective then became how to create an environment in which students could best achieve success.

A two-step process emerged. First came CLEVER, a statement as to what the Learning Commons would be—Collaborative, Learning-centered, Engaging, Virtual (technological) and flexible, Encouraging and inspiring, and Responsive. 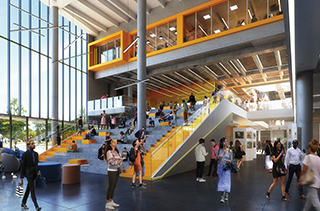 That was the “what.” Next came the “how.” April Trafton, a TCC Northwest learning lab manager, led the team crafting a service model mapping out specifics. “We worked on what we called a toolkit and created a list of questions to work through and come to consensus on,” she said. “Things like what services will be offered, what personnel are required, what resources are required, what’s the benefit to the student.” Other questions were even more granular, dealing with what functions should be contiguous, what the hours of operation would be, and how many and what kind of student spaces there should be.

Trafton sent the questions out to the team and promptly left for maternity leave. “When I got back, we were in the depths of it, just going through all the different questions and having all the heated discussions and whatnot,” she said.

Out of the heated discussions emerged the Service Model, the companion piece to CLEVER. The Learning Commons Principle team’s job wasn’t finished. The 3G8P teams are not designed to be finished, but to stay active in fine tuning their recommendations and adapting them to changing circumstances. Madison’s team now was ready to take on the job of translating their work to the various architects selected to design new facilities, including those at TCC Northwest.

Some architectural firms might have quailed at the prospect of dealing not just the population of one campus, but also eight other entities from throughout the College who would be sticking in their respective oars. But to the Huckabee + Gensler joint venture it was, as Gensler Principal Architect Barry Hand put it, “a great opportunity. We were pretty resolved about approaching this from a lifestyle perspective and, frankly, kind of staked our pursuit (of the design contract) on it.”

To Michael Ufer, a Gensler senior associate, the project was not just designing buildings, but rebranding Tarrant County College, knowing that their work at TCC Northwest would be echoed throughout the College. “In the architect’s verbiage, that’s a dream world,” he said. “For us to be able to set the platform, using TCC Northwest as that trajectory point, was wonderful.” 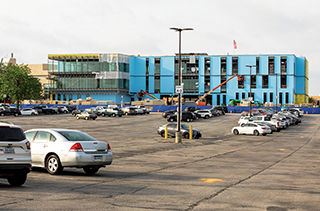 “The architects understood the process up front,” Blankenbaker said. “They met with the advisory panels to try to understand the Principles’ basic missions. They then synthesized that information and came up with key concepts that would permeate each building—clarity, connectivity, community, identity, efficiency and stewardship.”

Interactions between the architects and the Principle team were not always kumbaya. “We were going back and forth,” Madison said. “The architects would say, ‘Is this what you meant? Is this it?’ and I was so proud of the team because they were saying, ‘No, that won’t work. Have you considered this?’”

The architects listened and, over much time and many meetings, were able to put together a plan that reflected the Principle’s vision. “I feel like every time we talk with the architects, they’re all super excited about what we’re doing, said Susan Smith, library director at TCC Trinity River. “They know and understand what 3G8P is about.”

But it wasn’t just the team members’ expertise and persistence that impressed the architects. “The groups that we met with were very passionate,” Ufer said, “and when somebody matches our passion, we learn more. It makes good processes stronger, and the vision is more resolute. And, we want that from all our clients because it enables us to be better designers.”

At length, the floor plans went to TCC Northwest and another phase began. There was more give and take, more “Could we have this?” and “Have you thought about that?” The same Learning Commons turf issues popped up, and Blankenbaker had to pour a bit of oil on the troubled waters, telling people their work was important and would continue, but in a different setting. “I’m saying to my campus, ‘We can do this,’” she said. “It’s different, but we can do this. Different doesn’t mean it’s bad.”

The dreams of the TCC Northwest faculty and staff and the Principle advisory groups are fast becoming reality. Buildings No. 1 and 2 were “topped out,” or roofed, on January 17 and will be completed by February and June of 2023 respectively. The other two new buildings will come online in March 2025.

The people who will eventually take up quarters in the new buildings are like youngsters awaiting Santa Claus. “I’ve always liked the floor plans,” said Potemkin. “It just gets more exciting because the architects are really incorporating those real big function pieces we talked about. It will be very cool.”

“Great things are coming,” Trafton said. “It’s going to be exciting having new spaces, all the spaces we wanted to be visible and acceptable to students. And I think it’s something to look forward to for other campuses, too, as a prototype. I can’t wait. When people walk in (the Learning Commons) they’re going to be stunned. We’ll be the talk of the country, I’ll bet.”