An estimated 720,000 hours of video is uploaded to YouTube every day—some of it good, a lot of it bad. That’s because the advancement of modern technology has made media production accessible to more people than ever before. While almost anyone can record a scene or snap a photo with a phone, it takes production skills to produce a professional quality video or podcast. Students in the Radio, Television and Film (RTVF) program at TCC Northeast are learning those professional media production skills from industry insiders. Skills they can use to make an impact on their world.

Using media to influence an audience is not a new concept. In 1965, children’s television show host Soupy Sales told children watching his show to get their parents’ wallets and send him “some of those funny green pieces of paper” they would find. While the stunt only netted Sales a few dollars, parents watching the show were outraged. They worried about the effect that a broadcast television personality could have on innocent minds.

Fast-forward more than a half-century and media now influences almost everyone’s lives, for better or for worse. The invention of cheaper, better and more portable equipment, combined with the availability of online media outlets like YouTube, TikTok, MySpace and Soundcloud has made it possible for almost anyone to become an influencer.

An influencer is any person who can influence their audience within their niche to buy a product or take an action. Niches can include anything from food, fashion and wellness to alternative news, current affairs and conspiracy theories.

Since the invention of the radio and television up until the early 2000s, professional broadcasting equipment was large, heavy and extremely expensive. Only TV and radio stations and large corporations could afford it.

“When I did an internship 20-plus years ago, they gave me a BetaCamSP. Everything together weighed 35 pounds,” remembers Chad Jones, RTVF instructor and department coordinator at TCC Northeast. “Today, you get better quality out of something that weighs two-thirds less.”

Jones has spent his career following the evolution of broadcasting. “You may have heard of the digital revolution, the DSLR revolution, in filmmaking and video,” said Jones. “It started about 14 years ago. There was a new still photography camera on the market made by Cannon. As almost an afterthought, they added video recording capability to it. The smaller, more agile camera actually ended up revolutionizing the way video was shot. We start our cinematography students on these Cannon cameras, but then they move up to our many other cameras to practice their craft. Many of our advanced field cameras are feature film quality and are on the list of Netflix-approved cameras.” 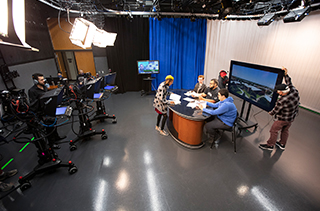 RTVF students learn professional skills for a variety of media production styles and platforms. “My ultimate dream is to be a director for animated TV and film,” said student Ellie Breedlove. “But I don’t want to be a director that doesn’t know how to do all the jobs of the crew also. That’s why I’m enjoying this whole program.”

“I want to be a camera operator for the NFL or NHL. I want to aim high and will do whatever it takes to get a job like that,” said student Justin Rohm.

“Hopefully I can take what I learn here and apply it to a career in play-by-play announcing,” said student James Jacobe. “I want to give people a sense of joy and happiness through storytelling with technology.” 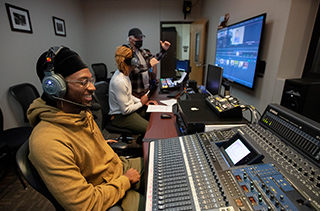 RTVF instructor Darryl Hoelting says they’ve enjoyed a lot of student success with the program. “We have former students who are now working as studio managers, news photographers, production coordinators and more. We’ve also placed a lot of students in internships at The Country Network and at Estrella, a national Latin television network with studios in Dallas.”

“Another student, Noah Tao, was nominated for a Student Academy Award for one of his short films. Still other students have entered their short films into festivals and won,” said Hoelting.

TCCD Instructional Television Manager John Gonzalez serves on the advisory board for the RTVF program. “We’ve had some great RTVF students placed in internships here at the College. When students get real-life experiences, they are better prepared to succeed.”

“One thing we really look at when we get new gear for the program is to make sure it is applicable in the marketplace,” added Jones. “The availability of new media equipment and outlets levels the playing field somewhat. I can’t wait to see what our students do in the future.” 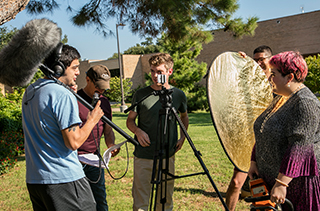