After a 13-year wait, Shaw Hu’s green card finally arrived, giving him the green light to live in the U.S. Things changed quickly, and Hu left his homeland of Taiwan to live with his aunt and uncle in the Metroplex. “It’s kind of like I came here to explore,” Hu said.

Once he arrived in the U.S., Hu knew he still wanted to go to college. Not only was he the first in his immediate family to come to the U.S., but he also would be the first to attend college. However, saving money was a big consideration. For that reason, he chose to work for a year to earn money for school and to gain his residential status. He landed positions with Sam’s Club and the Grapevine ISD.

When Hu started researching colleges, his uncle suggested he look at Tarrant County College since one of the campuses was close to their home. Hu didn’t know much about the American education system, so starting with a community college sounded good to him. He was surprised to find he could take the same class at TCC as a four-year school for about one-third of the cost.

“The reason I picked TCC in the beginning was mainly for the price,” he said. “I’m really, really grateful that I picked TCC.” Hu gives a lot of credit for that to his advisor, Martin Pham, who worked closely with him on his choice of major—Aviation Technology: Professional Pilot. Pham also helped Hu find on-campus employment.

What impresses me most about Shaw is his courage to come to America on his own and make a new life for himself. He’s been doing great things with his education since being here.

Hu completed TCC’s Professional Pilot program by earning his private pilot license (just one of the program requirements). However, he was unable to get his Instrument Rating and Commercial Rating due to a lack of funds for flight hours. He met with Pham once again to explore his interest in programs involving biochemistry and biology.

Initially, Hu looked at the Physical Therapist Assistant degree, but Pham suggested the Nursing program because he would be able to start working in the field while completing his BSN. Hu entered TCC’s Nursing Program in the fall of 2019.

Pham describes Hu as “a determined young man who demonstrates tremendous character,” noting “he excels academically by putting in the time needed to keep up with his near perfect GPA, yet finds time to actively participate in student organizations and community outreach.” 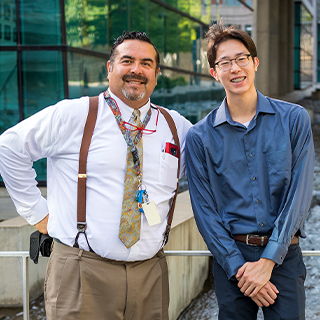 Getting to that point wasn’t easy for someone so far from home. Like many international students, Hu struggled with the language barrier. “In my country, they teach a little bit of English, but you learn from a textbook and it’s not regular English.” American slang and menus proved most challenging for him.

Hu appreciated instructors like Yvonne McCoy, who taught his General Psychology course at TCC Northeast. She worked with him during her office hours to make sure he understood the coursework. “He was a very smart student; it was primarily being so new to the English language that was difficult for him,” McCoy said. “I appreciated how diligent and determined he was. He really gave it his all.”

Another challenge Hu faced? Loneliness. He chose to address it by becoming involved at TCC Northeast, serving as a student ambassador, participating in Phi Theta Kappa (the honor society for two-year colleges) and joining the Men of Color Collaborative (MCC) though the Intercultural Network.

Hu ended up becoming an officer for the Phi Tau Chapter of Phi Theta Kappa. “As vice president of fundraising, Shaw’s discipline and humility set him apart from many student leaders,” said Janjura Williams, student development associate and chapter advisor. “He always made himself available to help others and be an impactful part of the success of the team and the PTK mission. His courage to think outside the box and seek out new innovative ideas allowed for profitable growth, increased membership and engagement.”

Marjeanna Burge, coordinator of Intercultural Student Engagement and Academic Success, said Hu has been a pleasure to know since he became part of the Men of Color Collaborative (MCC) more than two years ago. She praises him for not giving up in spite of challenges. “He is an inspiration to many,” she said.

Hu values the networking of both groups and is impressed by the diversity. In the Phi Tau chapter of Phi Theta Kappa, he met students from the Congo, Brazil, Nigeria and India. “And then I suddenly realized I’m not the only one (from abroad),” Hu said. “I feel like I belong.”

Even though Hu now is studying Nursing at TCC Trinity River East, he makes time to go back and support MCC and Phi Tau. “I’m busy, but I go back to support the activities they host. We all take it seriously,” said Hu.

“What impresses me most about Shaw is his courage to come to America on his own and make a new life for himself. He›s been doing great things with his education since being here,” said Michael Given, assistant speech professor at TCC Northeast. “Since becoming a TCC student, he has effectively maintained healthy relationships with others by involving himself in both on- campus and off-campus activities.”

Hu acknowledges it wasn’t easy. “I wasn’t an outgoing person at all, I am kind of shy in my work. Especially when your English is not good,” he said. “It’s hard to break the shell, but you have to.”

Hu says he is proudest of getting his private pilot license. “The reason why is that it is the first time for me in America getting something that can show my work,” said Hu.” He also takes pride in being a first-generation college student.

Now that Hu has successfully escaped his shell, he looks with anticipation to the future. Following his completion of the Nursing program, he plans to take his board exam and go to work immediately as a nurse while completing his BSN. Once he finishes his BSN, he is considering joining the U.S. Air Force. “Planning so far,” said Hu. “But you know, plans are meant for changing sometimes.”