We’ve all heard that what goes up must come down, but at TCC Northwest, there is a different wrinkle—things must come down before others go up. And TCC Southeast doesn’t have to worry about ups and downs; it’s all ups on that campus.

So it goes with the two building and redevelopment projects that comprise the largest part of the $825 million bond program approved by Tarrant County voters in November 2019. 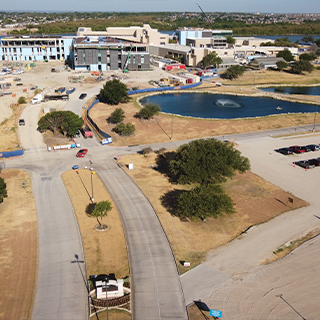 Next spring, TCC Northwest will begin saying goodbye to buildings known as WSTU, WTLO, WFAB and WCTS—the heart of the core campus built in the 1970s. They are tentatively scheduled to be demolished starting in May 2023 to make way for new buildings, which will be called NW02 and NW03. This construction will complete the campus’s redevelopment in late 2025.

The two new buildings currently under construction at TCC Northwest (to be named NW01 and NW05) should be finished by May 2023 and January 2024, respectively—just in time to house many of the classes, offices and functions previously located in the four demolished buildings while NW02 and NW03 go up.

The “reskinning,” or new fascia, of existing buildings WACB and WHPE (to be renamed NW04 and NW06) has been canceled. The exteriors will instead be modified to allow for the safe removal of the scaffolding and supports.

Meanwhile, the Northwest parking lot resurfacing is headed for the finish line. The north lot was completed over the summer, and the south lot will be substantially complete in January 2023. The final phase of construction (set to take place from February to June 2023) will incorporate the far south overflow into the completed south lot, providing a grand total of 2,047 spaces. 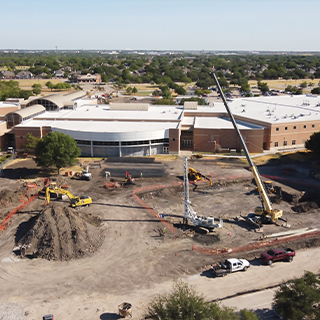 At TCC Southeast, construction began in June for two new buildings. The Student Experience Building (to be named SE01) will be north/northeast of the former main entrance to the Commons, and there will be a courtyard between the new building and ESED, which houses many campus administrative functions.

The other newcomer is the Academic Building (SE07). It will extend northeast to southwest from the present ESCT building, which houses science and technology classrooms and labs. Just as with the northern part of the campus, there will be a new courtyard—this one between the new building and the present library, which will become the Learning Commons.

Since the new buildings will be constructed on previously open space, there’s no demolition needed. There will be, however, extensive renovations both to the library and the entire eastern wing of the campus starting in March 2024 and lasting until July 2025.

For more information about the 2019 Bond program, including live camera feeds from the TCC Northwest construction site, visit tccd.edu/bond.